The practice of visiting a mikvah is not a common Humanistic Jewish experience. In fact, I think it would be fair to say that many Humanistic Jews would see the practice as being contrary to our values. It is for this reason that I want to share my story as an example of how this ritual might be reimagined in a Humanistic context. 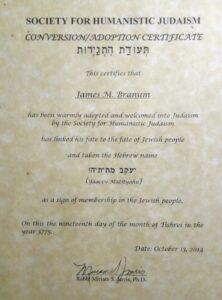 I was adopted into Judaism through the Society for Humanistic Judaism in 2014. The process was simple —  a series of self-study (guided by Rabbi Miriam Jerris), writing an essay and then choosing a Hebrew name —- after which I got my certification of Jewish adoption/convention. This process was perfect for me (as I wasn’t yet part of an in-person Jewish community), so I jumped into it with enthusiasm.

I remember the day that I got my certificate in the mail — I was excited about it and told some of my family and friends and of course, posted on social media about it, but at the same time, it also felt anticlimactic.

Several years later, my family and I joined a Reform temple in our city. I was concerned at the time about whether my Jewish conversion would be accepted, but thankfully the rabbi said that according to a responsa from the Reform movement, those who convert through the movement of Humanistic Judaism, were Jews in the eyes of the Reform movement. She also encouraged me to join the congregation’s “Introduction to Judaism” class, as they intended the class for not only prospective converts but also anyone who wanted to grow in their Jewish understanding and identity.

The class was lively and engaging, with my family gaining several close friends from that cohort. We especially were thrilled to see and hear the excitement of our friends as they were getting ready to appear before the bet din and then visit a mikvah for a ritual bath. At some point, I started feeling a tiny bit envious and realized that I was longing to participate in a ritual of my own to mark the ongoing transformation of myself as a Jew.

After a lot of thought and conversation, I decided that the right ritual for me visiting a mikvah. Such a visit would not be strictly a mikvah experience for conversion, but rather would be a kind of confirmation of the commitments I had already made.  And so, I started making plans to do this . . . but then the COVID19 pandemic hit. I thought at first that it might just be a delay of a few weeks or months until a local mikvah would reopen, but it ended up being a much longer wait.

Meanwhile, I kept living my Jewish life but I also reconnected with the SHJ because I was seeing more clearly that my Judaism only worked when it was done humanistically. 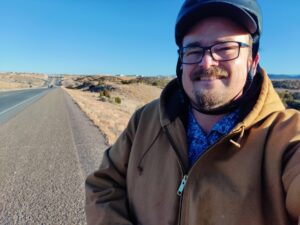 riding the e-bike to the hot spring in Santa Fe

Over the Thanksgiving break, my immediate family decided to make a road trip to Santa Fe, New Mexico which meant that I would have an opportunity to visit an outdoor warm-water spring-fed pool for my DIY-mikvah experience.

Of course, the circumstances required that I be flexible about the experience. Arguably the pool was a “kosher” mikvah (since it was a body of water that was fed through nature), but I would have to wear swimming trunks (nudity wasn’t allowed), and I wouldn’t be alone.  Still, the natural environment of the place was beautiful, located about 8 miles or so in the country from downtown Santa Fe (within range of my e-bike from our hotel). Also being outside somehow seemed appropriate since so much of my family’s experience of Jewish living during COVID was happening outside — we normally attended Shabbat services by watching on a big screen on the temple patio, rather than going inside. 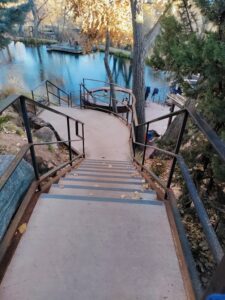 For the actual ritual bath itself, I, unfortunately, did not give a lot of thought to the appropriate blessing to say while doing the three ritual dips in the water, so I recited the traditional theistic blessing. But after saying the third blessing, I realized I needed more than just saying traditional words in Hebrew. And so, I dipped under the water a fourth time and when I came up, I made a solemn promise to myself, that I would never allow Judaism to override the overarching humanistic/universal values that should unite us all, and that I would always engage with my Judaism from a place of free-thought and individual conscience. In other words, I was committing myself to being a contrary Jew (to reinterpret a phrase from the agraian author Wendell Berry).

Since my time at the mikvah in Santa Fe, I have experienced a lot more confidence in Jewish spaces, as I’m no longer afraid to talk about my conversion. But I also feel more boldness in claiming and reinventing elements of Jewish ritual practice in ways that are meaningful to me, but also in rejecting elements of ritual that are not.

How mikvah can be reinvented in Humanistic Jewish contexts

I don’t think that having a mikvah ritual should be a required element for adoption in Judaism in our movement, but I would suggest that it should be offered as an option. Some of the reasons I think that it works well as a reinvented ritual include:

The Vanishing Separation of Church & State: A Rabbi’s Perspective
A review of Am Yisrael High: The Story of Jews and Cannabis