DONATE
Blog
Home Blog A Journey Through Hanukkah for All Ages

A Journey Through Hanukkah for All Ages

This article was published in the Fall 2020 Issue of Humanistic Judaism Magazine. It was written by Rabbi Adam Chalom, rabbi of Kol Hadash Humanistic Congregation in Deerfield, IL and the dean of the International Institute for Secular Humanistic Judaism (IISHJ).

Suggested passages to read after lighting candles on each night:

In winter, the nights grow longer and colder. People all over the world light candles and lamps to fight the darkness. Every time we light Hanukkah candles, we remember how important fire is to our lives. The power of fire cooks our food, keeps us warm, and makes our lives better.

We need each other for warmth and inspiration. Fire is like our family, our community. Our family cooks our food, keeps us warm, and makes our lives better. And our family goes back a long way, part of a long tradition. The Festival of Lights is a festival of memory and tradition, too.

The story of Hanukkah goes back to over two thousand years ago, when the Jews had their own land, with their own temple in Jerusalem. A new people, the Greeks arrived, and the Greeks wanted everyone to be Hellenized—to speak Greek, to eat Greek food, and to follow Greek religion. Greek ideas were interesting, but the Greek king Antiochus tried to force all Jews to be Greek. There were only a few Jews compared to the Greeks, but the Jews wanted to decide for themselves what to believe and how to be Jewish. The Maccabee family stood up to the Greek king and took back the Jerusalem Temple. They entered the Temple, cleaned it up, and re-lit the Menorah with new oil. And they dedicated the Temple with an eight-day festival—the Hebrew for “Dedication” is Hanukkah.

The Rabbis who led Judaism after the Jerusalem Temple was destroyed did not like the Maccabees. They thought that the Maccabees betrayed Judaism by themselves Hellenizing, and by declaring themselves to be High Priests and Kings, even though they weren’t from the family of King David. And they thought that military rebellion and national pride was dangerous, from their own experiences of two failed revolts against the Romans. But they couldn’t stop Hanukkah—Jewish people kept lighting lights in the middle of winter. So the Rabbis told a story to take credit away from the Maccabees— they claimed that the pure oil in the Temple was only enough to last for one day, but it miraculously burned for eight days. We know today that human beings can do amazing things, things our ancestors would have thought were miracles. We celebrate the human power to tell stories, to imagine new possibilities, and to make the marvelous real.

Fourth Night—The Menorah and the Hanukkiah 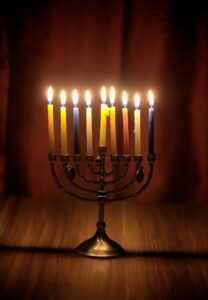 We use the Shammes to light the other candles on the Menorah. As we light more candles each night, the light grows brighter. From one light, we make a lot of light. From one person with hope, we can make a lot of hope. We need to be the candle that lights all the rest.

The story of the oil may have taken credit away from the Maccabees, but it also led to some of the tastiest food of the Jewish year. In memory of the long-lasting oil at the rededication of the Temple, we now share foods cooked in oil as part of the holiday celebration.

Potato latkes, with applesauce or sour cream or a bit of both, became very popular among Ashkenazi Jews in Eastern Europe. And sufganiyot, jelly doughnuts fried in oil and filled with jelly or custard, are popular among Sephardic Jews in Middle Eastern countries, and in modern Israel as well. An old joke claims to describe every Jewish holiday: “they tried to kill us, they failed, let’s eat.” It just wouldn’t be Hanukkah without sharing these special foods with family and friends.

When the dreidel game was invented in the Middle Ages, the letters on the dreidel were the Yiddish rules for the game:

נ Nun for Nisht “nothing”, ה Hay for Halb “half ”, ש Shin for Shtel ayn “put in”, and ג Gimmel for Gantze “the whole thing”.

To make children happy during Hanukkah, parents would give them some coins (gelt) to play dreidl or to spend on

themselves during the holiday. As Jews became more connected to the world around them, and as Christmas became more about giving lots of gifts and less about religion, Hanukkah also became a time to give and receive gifts. The trick is knowing how to do it.

It’s too easy to get caught up in “getting” and not spend enough time on “giving.” We can give not just to our families and friends, but to people in the wider world who really need it. They don’t need expensive gifts— we can give them food, and clothing, and shelter, and hope. In fact, we don’t need expensive gifts either—we are grateful to be remembered and loved, and we are grateful to have the chance to show how much we love other people. It turns out that to give IS to receive!

In Jewish life, we light candles for the past and for the future. Yahrtzeit (memorial) candles remind us of the life of people that we loved, and Shabbat candles on Friday night celebrate the time of rest and community that is just beginning. The warmth of the flame is the past, and the light of the flame leads us forward.

We are heirs to many traditions. We are human, and we celebrate the achievements of humanity throughout its history. We are American, and we celebrate the freedom and opportunity that our ancestors were looking for when they came here, and that we enjoy today. And we are Jewish, part of a “golden chain” of Jewish culture and custom and holidays and history and story and food and games and giving. They are ours, and we rejoice.