This is a guest post by SHJ member Kristen Koeblin who just adopted Judaism. Her Hebrew name is Tamar Jordana. This is her story. 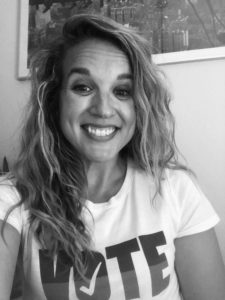 When I was 12, my family received our copy of The Book of Wikler. It is my maternal grandfather’s genealogy and some family history in a white binder with the family crest on the front. Initially, I was just interested in seeing the names I knew. When I finally got past that, I saw the immigration stories, the old photographs, and then a list of the 66 relatives that were killed during the Holocaust. When my grandparents moved that same year and sent us my grandfather’s menorah, something clicked and I realized that my mom, my brother, and I were part Jewish. I remember bringing this up to my mom, and her response at the time was, “Kristen, you can’t be part of a religion. You’re either fully something or you’re not.”

I am forever grateful that what my mom said never stopped me. The Book of Wikler sparked a lifelong interest in learning about my own heritage and culture. I read books about the Holocaust, did college research papers on Jewish people in other countries, worked at official and unofficial Jewish summer camps and the local JCC, and nagged my mom with questions about her dad’s family after he died. In one particularly redeeming moment, a rabbinical student told me that I could absolutely be part Jewish because the diaspora forced Jewish people to develop their own culture, and being Jewish was much deeper than Judaism as a religion.

This was all enough for me until a few years ago. I gave birth to my son, and my Cambodian husband has been able to expose him to his culture, which had almost been lost with a genocide that he and his family escaped. I, on the other hand, realized everything had been swallowed by mainstream America. I felt like all I had to pass down was a very bare bones version of Hanukkah — I don’t even have a family latke recipe. My son was also born when the world found out about family separation at the US-Mexico border. When I started seeing Jewish organizations speaking out against these atrocities, I realized how much I still had to learn about being Jewish.

I knew that I could be culturally Jewish, but I always felt like an impostor saying that because I am also an atheist. It’s nothing that anyone did, although the Holocaust does not help — God just didn’t make sense to me, even at a very young age. It wasn’t until I found humanistic Judaism that I realized being a Jewish atheist was a real thing and it was completely normal. Naming something can be a comfort and seeing myself and everything I believe in written in mission statements, descriptions, and even resolutions has been a huge and emotional relief.

Three generations after my great-grandparents fled Austria-Hungary during World War I, I am here trying to revive what has been lost. I am so excited that there is a way to honor my family’s past, present, and future in a way that is authentic to me. I am looking forward to passing on not only the celebrations, but also the Jewish values that were unknowingly passed down to me through my grandfather and my mother. I am so happy that there is a place for me and my multicultural family in Judaism, and although it turns out I have always been there and lived it, I cannot wait to be Jewish.