This is a reprint of an article written by Rabbi Jeffrey Falick entitled, “History Lessons” first published in Humanistic Judaism Magazine, Winter 2017. Rabbi Falick is the rabbi of the Birmingham Temple, Congregation for Humanistic Judaism in Farmington Hills, Michigan.

For a schedule of Hanukkah celebrations in SHJ communities, follow this link!

I’m not talking about the story that we all grew up with about the magical cruse of oil. By now I hope that Humanistic Jews—who don’t believe in magical oil—also know that this is a very late tale created by Talmudic rabbis centuries after the holiday’s creation. No, I’m talking about the real story of the civil war that took place in mid-second century B.C.E. Judea between the Maccabees and pretty much everyone else in their country.

A few years ago I prepared a pretty extensive PowerPoint presentation about this war for the Birmingham Temple that asked the question, “Were the Maccabees the good guys?” My conclusion was an unequivocal “No!” They were a bunch of Taliban-like religious zealots fighting a civil war against Hellenizing Jews.

What about those Hellenizers? Were they the real heroes?

With their embrace of philosophy and the arts, there is good reason to see them in a more positive light. They were cosmopolitan, open to secular culture—or to be more historically accurate, to Hellenistic influences— and they just seem to have been more like my kind of people. However, the story is very complicated and their opposition to Maccabean religious fanaticism does not really position them as the good guys.

This is because the war was not a clear-cut battle between fundamentalist Jewish Maccabees and cosmopolitan Jewish Hellenizers. Certainly they had profound religious and philosophical disagreements, but the clash began over power and fortune. To fully appreciate this we need to understand the politics of mid-second century B.C.E. Judea and the power struggles between two foreign kingdoms that vied to dominate it.

If you think back to your world history classes, you might recall that toward the end of the fourth century B.C.E., a young general burst forth from Macedonia and laid siege to lands from Greece to Asia Minor to Egypt to Persia. This general, of course, was Alexander the Great. Although he might have been great in battle, he was not so great in lifespan. He died in 323 B.C.E. at the age of 32.

Once gone, his generals competed for power, ultimately dividing Alexander’s conquests into three kingdoms. The two that struggled over Judea were the Ptolemies and the Seleucids. Judea is where their borders met and where they battled for both each other’s territory and the important crossroads of Judea. Judeans took sides, seeking the favor of the victors—favor that came with favors, so to speak.

For decades, the Ptolemies held Judea with the support of a far-flung aristocratic Jewish family known as the Oniads, who paid the Ptolemies tribute. In return, the Oniads were rewarded with substantial power, including control over the Jewish high priesthood and its treasury. The Oniads were no rural pietists. They and their supporters were urban and quite a bit Hellenized. Yet in seeking to placate the masses in the countryside, they never went overboard with it. In the Temple itself, they made sure that they were as scrupulous as possible about Torah law. In this way, Ptolemaic rule worked well for both the Oniads and rural traditionalists—until 198 B.C.E., when Judea again switched  hands.

Ptolemies out. Seleucids in. 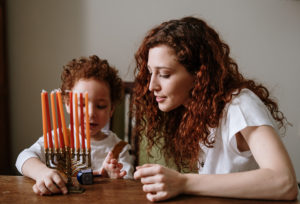 With them came their own Judean supporters, rivals of the Oniads known as the Tobiads. As more radical Hellenizers, the Tobiads wanted Judea to fully join the rest of the Hellenic world. This included pressing for a more metaphorical and syncretistic take on the Torah. After all, they reasoned, all the good stuff is Greek and if the Greeks don’t even really believe in their gods any more—having long ago turned them all into metaphorical representations of natural and spiritual realms—why can’t we do the same thing with Yahweh?

So the Tobiads, both to demonstrate their support for the Seleucids and because they really did like this more open Greek approach, began to re-model the Temple and its rituals. Ultimately, they erected a statue of Zeus in the Jewish Temple! They justified it by asserting that Zeus was simply a Greek version of Yahweh (albeit with a very different backstory). For the date of the big reveal they chose the 25th day of the Jewish month of Kislev in honor of the Greek winter solstice festival Dionysia. It would not, however, be a very merry Dionysia for the Tobiads because shortly thereafter, all hell broke loose.

The rival Oniads (remember them?) along with a whole mess of rural pietists known as the Hasidim (not the ones we have today) rose in rebellion, committing acts of terror throughout the land. Before long all-out warfare erupted accompanied by disruptions of trade and,  significantly, disruptions of payments to the Seleucid king, Antiochus IV Epiphanes. The Tobiads informed him that the chaos was the fault of a bunch of pious zealots led by a family of rural priests named Hasmoneus, better known to us by their nom de guerre, the Maccabees.

Most of us know how it ended. In 165 B.C.E. the Maccabees won. It was not a clean sweep but the Seleucids were defeated, or at least exhausted enough to withdraw most of their troops. They granted semi-autonomy to Judea even as they retained formal control until 110  B.C.E. But they never messed with Judea again.

With their victory, the Hasmoneus family claimed royal sovereignty and established what we now call the Hasmonean Dynasty. Despite their assertions of steadfast loyalty to the Torah, they actually violated Torah law when they combined the monarchy and priesthood in the hands of one family. Worse yet, while they were definitely priests, they had no claim to Davidic heritage, thus disqualifying their royal claims. The Hasmonean Dynasty would go on to rule viciously, invading their neighbors and even forcibly converting them to Judaism, circumcision and all. Its leaders were also corrupt. Infighting led to their downfall and the imposition of Roman rule in around 63 B.C.E. 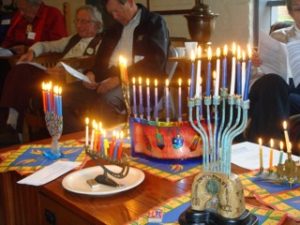 Today, of course, we no longer think about all of this. Instead, we remember the Hasmonean Maccabees for the holiday that they created to re-dedicate the Temple to Yahweh. Early sources lack any mention of miraculous oil, but at least one provides a plausible reason for the eight-day festival: ” On the anniversary of the very same day on which the Temple had been defiled, the 25th of Kislev, they now purified the Temple. They celebrated joyfully for eight days, just as on Sukkot, knowing that [a few months before] on Sukkot they had spent the festival [hiding] like wild animals in the mountains and caves…. “(II Maccabees 10:1-8).

We don’t know if this is any more true than the magical oil. It was likely written in Egypt around 125 B.C.E., so it is not a contemporaneous account.

I, for one, am far more curious about why they selected the date of 25 Kislev. Perhaps they really did choose it out of spite. But this raises the question: Why pick the date of a holiday you hate for a holiday you’re creating? The only answer that I can puzzle out is that they actually wished to preserve the holiday and the best way to do that was to erase its Hellenistic associations by offering a new reason to celebrate it.

In the end, a solstice holiday is a solstice holiday no matter what story you attach to it. Dionysia and Saturnalia were not the only ones. There are solstice festivals of light all over the world. That’s why, as Christianity moved into Europe it also soaked up pagan lighted trees, Yule logs, and mythical gift-giving elves. And it’s why, when it moved to America, Hanukkah was transformed into a blue and white version of green and red Christmas. In America, where we excel at mixing and matching winter customs, it’s not entirely incorrect to think of the whole thing as one big “Chrismukkah” celebration. Even when Hanukkah comes much earlier, it tends to linger on until around December 25.

If you are inspired by the story of the Maccabees, by all means celebrate Hanukkah in their memory and honor. I, for one, find them—and their foes—exceptionally uninspiring.

I will, however, give them credit for doing one thing right: They saved Dionysia, bequeathing Jews a solstice festival of light to call their very own. And that’s reason enough to celebrate.