This blog was written in celebration of National Bagel Day, recognized annually on January 15th!

Many years ago, I saw a comedian at a local laugh factory and his entire bit was on food being a cultural love language. I laughed with a strong sense of knowing as he joked about his Jewish Italian grandmother making a giant brisket and challah on Fridays, and meatballs you could roll out the door for 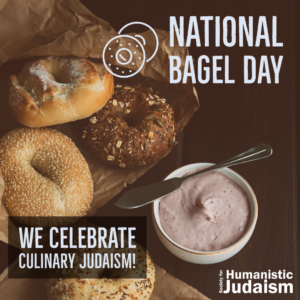 Sunday supper. Cultural foods are so much more than tasty offerings at a get together. They speak to ancestral connections, robust tradition, and even remembrance of times of struggle and recovery. Feeding people implies care, and sharing cultural foods with friends shows a level of trust and acceptance. In short, food is love.

While the original beginnings of the bagel have ties to a German food item similar to the pretzel, the Jewish cultural connection to bagels dates back at least to 800 CE when antisemitic laws in Poland forbade Jews from baking bread because it was considered holy food in the Christian church. Because bagels were boiled first, it was a bit of a loophole. Over time, bagels became a staple food in Jewish cultural cuisine, serving as an important celebration food due to their circular shape with no beginning and no end. Fast forward several hundred years, and it’s just not a “break the fast” (after Yom Kippur) without a bagel and lox platter. 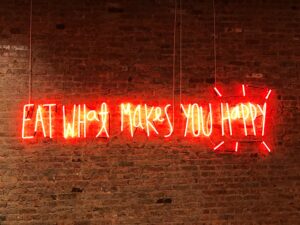 Yes, food is love. But when something is culturally expected, it often becomes fodder for stereotyping and microagressions. The reality is, while we may love and connect with our cultural cuisine, there is so much more to being Jewish than what we eat. Not every Jewish person loves a plate of gelatinous gefilte fish, or a heavy schmear of horseradish on their 10th piece of matzoh (don’t judge me). Personal values and dietary sensitivities lead many Jews to avoid foods that are ”typical Jewish cuisine.” And while potato latkes are a dream, if you’re lacking a gallbladder like I am they aren’t too enjoyable in mass quantities. It doesn’t make me feel any less Jewish. In fact, it makes me feel far more connected knowing that I am caring for my body in a way that allows me to keep celebrating my culture for years to come.

Today, I will definitely be enjoying a bagel… probably with lox and capers. And I’ll also be taking some time to connect with my culture in other ways that fulfill me. Like helping my kiddo prepare for his B Mitzvah!! Shalom!