[For a printable PDF of this recipe please click here (page 2).]

It is a part of the human condition to celebrate light during the season’s shortest and darkest days. Hanukkah occurs around the winter solstice where in the Northern Hemisphere the days are the shortest. Thus, a holiday celebrating light both scientifically and metaphorically is most welcome. And so today we celebrate Hanukkah as the festival of lights for eight days as we ache for longer days and more “light” in the world.

The miracle of the oil story gives rise to the custom of eating fried foods on Hanukkah. To assist in that custom, we offer this recipe for latkes that are both delicious and gluten-free — truly a modern-day miracle! [Recipe originally published here.] 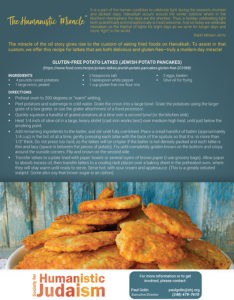 Peel potatoes and submerge in cold water. Grate the onion into a large bowl. Grate the potatoes using the larger grate of a box grater, or use the grater attachment of a food processor.

Heat 1/4 inch of olive oil in a large, heavy skillet (cast iron works best) over medium-high heat, until just below the smoking point.

Add remaining ingredients to the batter, and stir until fully combined. Place a small handful of batter (approximately 1/4 cup) in the hot oil at a time, gently pressing each latke with the back of the spatula so that it is no more than 1/3″ thick. Do not press too hard, as the latkes will be crispier if the batter is not densely packed and each latke is thin and lacy (space in between the pieces of potato). Fry until completely golden-brown on the bottom and crispy around the outside corners. Flip and brown on the second side.

Transfer latkes to a plate lined with paper towels or several layers of brown paper (I use grocery bags). Allow paper to absorb excess oil, then transfer latkes to a cooling rack placed over a baking sheet in the preheated oven, where they will stay warm until ready to serve. Serve hot, with sour cream and applesauce. (This is a greatly debated subject. Some also say that brown sugar is an option.)

Why I am Becoming a Humanistic Jew
The Hanukkah Story – Miracle, Myth, or History?