The House Managers’ Impeachment Testimony, Nontheistic Reasoning at its Best

This is a guest post by Marlene Cohen, Secretary of the SHJ Board of Directors, a long-time member of our DC-affiliate Machar, and Chair of the SHJ Youth Education Committee.

Like a Rorschach ink blot test, descriptions of what occurred in the US Senate’s trial for the 2nd impeachment of Donald J. Trump, February 9-13, 2021, will vary widely when voiced by observers of different political beliefs.  Yet there was widespread reaction, even from President Trump’s lawyers, that US Representative Jamie Raskin, Jewish Democrat from Maryland and lead prosecutor for the case, did one fine job.   Republican Senator Bill Cassidy (La.) flipped his position after listening to both sides. Would that more Senators were openly listening as well.  But the American people and the world were listening, and I hope we will long remember that reason and facts are the path out of pain, confusion and muddle-headedness. 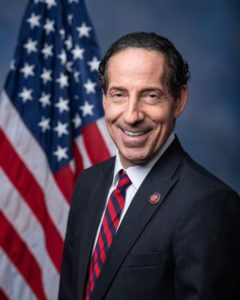 Raskin and his team of House Managers who outlined the case against President Donald John Trump, stated the facts succinctly in an organized timeline, then played the specific video clips and quoted conservative thinkers as direct evidence, to allow the massive audience to understand in a larger framework what happened at the US Capitol on January 6, 2021.

Let’s take a moment to honor Rep. Raskin for striking this blow for reasoning in our decision-making.  Raskin was the co-founder of the Congressional Freethought Caucus (finally a caucus for the nonreligious, started in 2018) and is a US Rep. who gets sworn into office on a copy of the Constitution, not the Bible.

Here are some examples of the structure of Raskin’s arguments.

In his opening statement Raskin laid out historical precedence for when impeachment can be conducted. He quoted former President John Quincy Adams when he categorically declared, “I hold myself so long as I have the breath of life in my body amenable to impeachment by the House for everything I did during the time I held any public office.”

Precedence showed consistently that out-of-office public officials have been and can be impeached.

In his closing arguments, Raskin used analogies to counter the argument that whatever President Trump did after the January 6 insurrection began isn’t important.

“Senators, think about it for a second. Say you light a fire and you’re charged with arson. And the defense counsel says everything that I did after the fire started is irrelevant. [The] court would reject that immediately say, ‘That’s not true at all.’ It’s extremely relevant to whether or not you committed the crime. If you run over and try to put out the flames, if you get lots of water and say, ‘Help! Help! There’s a fire,’ you call for help, a court will infer, could infer that you didn’t intend for the fire to be lit in the first place. They would accept your defense, perhaps, that it was all an accident. It was all an accident. Accidents happen with fire. But if on the other hand, when the fire erupts, you go and you pour more fuel on it, you stand by and you watch it gleefully, any reasonable person will infer that you not only intended the fire to start, but that once it got started and began to spread, you intended to continue to keep the fire going.”

In answer to a question about the significance of President Trump later in the day asking the Capitol attackers for “peace” once, after asking them to “fight” many times, Raskin asked (paraphrasing), If bank robbers, on the way out the bank door, yell, “Respect private property,” does that make them less guilty of the robbery?

Those were two great analogies to help listeners not get lost in constitutional weeds.

And Raskin’s language was direct. “I mean, come on. Donald Trump’s refusal not only to send help, but also to continue to further insight the insurgents against his own vice president, his own vice president, provides further decisive evidence of both his intent to start this violent insurrection and his continued incitement once the attack had begun to override the Capitol.”

He quoted Representative Liz Cheney (one of many times he used Republican and conservative sources), “The President of the United States summoned this mob, assembled this mob, and lit the flame of this attack. Everything that followed was his doing. None of this would have happened without the president.”

It is true that there was also powerful underlying emotional appeal to Rep. Raskin’s speech.  On January 5 he buried his 24-year-old son who died of suicide. On February 9 he showed the strength to defend the United States in the Senate impeachment trial.  But Raskin stated the facts there too, honestly conveying his raw anguish, not playing on our emotions. The Guardian wrote, “In a trial focused on the excesses of a would-be strongman, Raskin’s very human displays of vulnerability have the quality of redemption.”

In this awful time for our nation, when public figures claim that counted and recounted state ballot numbers are actually off by over 11,000 votes, that Hillary Clinton runs a pedophile ring in the basement of a DC pizza parlor (which in fact lacks a basement), and that Jews started California fires with their solar-powered space generators, we really should embrace the use of evidence and reasoning to form our decisions.

Let’s also recognize Rep. Jamie Raskin as a champion and teacher of evidence-based reasoning, the pride of secular humanistic Jews, and a wonderful role model for the sort of leadership that can take the US to better days ahead.