DONATE
Blog
Home Blog Is Being Humanist a Political Statement? What About Being Jewish?

Is Being Humanist a Political Statement? What About Being Jewish?

Four years ago, almost to the day, I posted an opinion piece declaring “We Stand For Equality and Against Hate,” expressing concerns about the incoming Trump administration from a Humanistic Jewish perspective. I was new to my role at the Society for Humanistic Judaism and wasn’t fully aware of the political diversity within our movement, so I was surprised by the pushback I received from a small but vocal few. 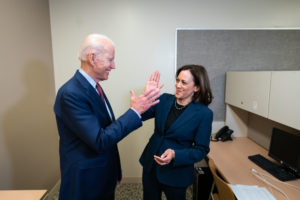 Historically, American Jews vote liberally, which held true again in the 2020 presidential election. Jews chose Biden at least 2-to-1 over Trump. And it is fair to think that Humanistic Jews went for Biden even more, considering non-religious Americans voted for him at the highest rate of any “religious” group. Still, it suggests perhaps a quarter or more of our members voted for Trump, and we should always strive to build rather than burn bridges.

We may never have political unanimity, but I feel it’s important to discuss where our movement’s liberalism comes from, particularly for conservative-leaning members who wish we would “just stay out of politics.”

It is certainly possible to participate in our movement while avoiding politics, or disagreeing with movement positions on social issues. A path for doing so may be suggested right in our full movement name,  Secular Humanistic Judaism, though I understand the words have different meaning for different people. For me, the “secular” addresses what drew many folks into our movement in the first place, a liturgy without reference to God or the supernatural.

Whether describing themselves as atheist, agnostic, freethinker, “spiritual not religious,” believing in “something” other than the God of the Bible, and/or part of an interfaith household looking for neutrality about belief, all should be able to derive meaning from our movement. Secular households regardless of political bent can benefit from participating in our non-theistic celebrations of Jewish holidays and lifecycle events, adult and youth education, and other communal programs. If that’s what people are looking for, I hope “politics” will not be the make-or-break issue for anyone’s relationship to our movement.

Of course, leaving theistic religion behind is an inherently progressive act, and Americans who describe themselves as secular are generally more politically liberal too. Still, “secular” is explicit about non-theism while implying related values. “Humanistic” includes non-theism while explicitly codifying the liberal values most of us share. Humanism, as both a philosophy and as a global movement, provides pretty clear statements of ethical values. And those values are liberal values.

Rabbi Sherwin Wine understood when he founded our movement that it wasn’t just about the rejection of religious dogma, it was also about celebrating what replaces it, a positive and proactive approach to addressing human challenges through human-centered ingenuity and intellect.

Since Rabbi Wine organized his innovative approach in the early 1960s, the other non-Orthodox Jewish denominations eventually embraced similar positions on issues such as interfaith marriage and LGBTQ equality. They were already liberal on issues like racial equality and abortion. Though they’re not calling it “humanism” and maybe never will, Reform, Reconstructionist, and even many Conservative Jews acknowledge that the Torah is not the direct word of God and therefore it’s up to people to determine what is ethical.

So what influences our ethical approach? One factor is the minority experiences of our overlapping identities—Jewish and secular and humanist—that leads us to empathize with the persecuted and marginalized. Humanism, by definition, values equality and dignity for all, and after the Holocaust most non-Orthodox Jews outside Israel also became much more universalist in outlook.

Within our movement, we can (and do!) debate the policies to achieve shared societal goals, whether through laissez-faire capitalism, libertarianism, democratic socialism, or other political systems. And we can certainly debate which politicians or political parties we think will best enact those policies.

But the values themselves are fairly fixed. I mentioned the value of equality in that piece four years ago: equality regardless of gender, sexual identity, race, or creed.

I felt at that time that those values were under attack. And I stand by what I wrote then. It wasn’t difficult to be prescient when it came to hatred and anti-Semitism! I was far from the only person in the Jewish community sounding alarm bells, and I provided links to other Jewish organizations who were as well.

Since then we’ve had anti-Semitic murder in Charlottesville and Pittsburg, and racial strife that led to rioting throughout our nation. That happened on this administration’s watch, and too often, the response was to pour gasoline on the flames rather than seek reconciliation.

What I couldn’t have known at that time was how deadly their anti-science agenda would be to so many of our fellow Americans. During a pandemic, wearing masks saves lives. We knew that 100 years ago, during the Spanish Flu, and we know it now. Yet the science denial—deeply steeped in religious-fundamentalist magical thinking—was encouraged from the highest office in the land. In contrast, humanists believe in science. It is one of our central values. All Humanistic Jews should be working to remind our fellow citizens that “freedom” only works when coupled with responsibility! 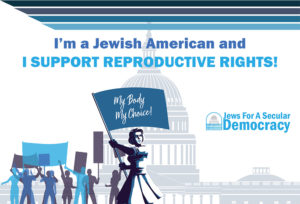 Four years ago, I wondered how long the damage would last for our society. We know now that it will be decades. This administration appointed THREE Supreme Court justices who stand in direct contradiction to our humanistic values on LGBTQ+ equality, women’s bodily autonomy, and many other issues of church-state separation.

Since that time we launched our pluralistic social justice initiative, Jews for a Secular Democracy, to educate and advocate for church-state separation through a Jewish perspective. Christian fundamentalism has been on the rise for decades and is now ascendant. As Jews and as humanists, we are religious minorities, and the First Amendment needs to be a shield to protect us not a sword to discriminate against us. I feel like we have more agreement on church-state separation in our movement than we do about any given political leader, and this is a place from which to build consensus and action.

Historically, Jews have lived in societies that are overwhelmingly another religion. Jews are a political statement just by our mere existence! The same is true today for humanists. Living our values prevent us from being apolitical. That’s why, while I hope we can always discuss our political differences respectfully and treat everyone with dignity, Humanistic Judaism as a movement (if not necessarily all of our members) is and will remain outspoken about our values.

Ruth Bader Ginsburg: The People’s Justice
Kamala Harris’s Family is Like My Family