Is the December Dilemma Still A Dilemma?

When I conceived of this article, the question I posed in the title was sincere. I know so many intermarried couples who have blended their traditions together successfully. Then I Googled “December Dilemma.” It produced about 94,400,000 results. To be fair, the first two were positive in tone, suggesting best practices and teaching tolerance. But quickly, many of the others, at least on the first page, dealt with the topic as a “problem.”

Around the time intermarriage in the Jewish community reached 50%, I met the man who would become my second husband, Stephen Stawicki. I came from an Eastern European (Russian/Polish) Jewish background. I was second- and third- generation Canadian. He came from an Eastern European (Polish) Roman Catholic background. He was second- and third-generation American. What we share is a strong cultural commitment to our heritage, a humanistic philosophy of life, and similar political views (thank goodness). 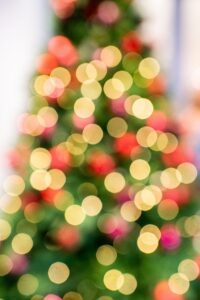 For more than thirty years, we have created a home together that rejoices in our similarities and celebrates our differences. In December, we celebrate Hanukkah and Christmas because these are the holidays that hold our childhood memories. For me that means lighting the Hanukkiah (Hanukkah menorah), eating potato pancakes, and sending my grandchildren gifts. For Steve it means decorating a Christmas tree, listening to Polish Christmas Carols, hanging stockings, and exchanging gifts. We also developed some traditions of our own— a special meal Christmas Eve or Christmas Day with friends and maybe a movie and Chinese food. And as years passed, Steve is the one who never forgets to set up the Hanukkiah every night, and I am the one who has to buy a tree ornament on every vacation we take.

Although I wouldn’t call it a dilemma, we did experience a speed bump when we moved in together in late October of 1987. We had agreed on most of the above, but one evening Steve told me he was going to the store to buy lights for the outside of the house. I flipped out—mostly internally, but it did not sit well with me. After reflecting, I remembered a childhood tradition of driving through my neighborhood with my parents at night looking at the lights on the houses. I remembered pointing to a house with lights and saying, “This is a Christian house,” and then pointing to a house without lights and saying, “This is a Jewish house.” So, no lights on the outside of our house.

I never for one moment felt that I was disloyal to the Jewish people, but some people have suggested that I’m not an appropriate role model for young unmarried Jews, for Jewish families, or anyone else Jewish for that matter. However, I see myself as an ideal model for Jews today. More than 50% of Jews are marrying individuals not born Jewish. Two-thirds of Jewish families are intermarried. What Steve and I model is a successful strategy for coping with our differences and sharing what we love about our backgrounds.

In 1996, I graduated with a Master of Arts Degree in Humanistic and Clinical Psychology. My thesis, entitled “Celebrating Differences,” focused on the experience of being intermarried. The second to last chapter took the form of a message to a couple being intermarried. In part, I said:

There are times when people feel that religious differences between two people who are about to marry may be an obstacle to their happiness. I have a slightly different point of view that I often share with couples during their marriage ceremony.

All marriages are mixed marriage. All marriage partners are different in some ways. They may differ in the way they spend money, or the way they resolve conflicts, or in their sleeping patterns. But I guarantee that there is not one couple on this earth that would say they agree on everything.

Couples who come together from different religious, cultural, or ethnic backgrounds acknowledge their differences immediately. They learn skills of negotiation to cope with their differences. And these are the exact skills that are needed in all marriages. I believe that intercultural couples can be stronger than other couples who share backgrounds, and are not as aware of their differences as you may be.

I know other couples have more difficulty than we did. Yet, we are not the only couple who can share success stories. My hope is to let families know that dealing with intermarriage and navigating the sometime rough waters of the December holidays can be done, with success. So for some, December is a wonderful time for family and friends.

Currently, while speaking or writing about diversity in intermarriage, I am more apt to say, “Diversity keeps life interesting. We can always enjoy the things we share. It takes special people who can learn to celebrate their differences—special people like you.” December does not have to be a dilemma.

The Eight Lights of Hanukkah
Words matter: How we can use language to respect diversity