This is a guest post by Judi Gladstone, founder of the Secular Jewish Circle of Puget Sound. The year 2020 has provided many heartbreaks and responses to them, specifically the Black Lives Matter movement. It is incumbent upon us all to examine our biases. Only then will change be possible. This article was first published in Humanistic Judaism  Magazine, Spring 2018, p. 4 & p.17.

Talking about race and privilege in America is almost as sensitive as talking about Israel. Nonetheless, the Secular Jewish Circle of Puget  Sound (SJC) Shalom Sunday School parents rose to the challenge for their discussion group to explore what it means to be Jewish in a world of white privilege and what, then, they should be teaching their children. Because the topic is of broader interest, the entire SJC community was invited to join the parents.

Two articles provided a starting point for the discussion: Emma Green’s “Are Jews White?,” from the December 5, 2016 issue of The Atlantic Magazine, and a blog post at Mayan.org by Talia Cooper titled “A Call to My Beloved Jews: We Gotta Talk About Privilege.” With these provocative readings and a list of ten ground rules to keep the conversation safe and respectful so people would be forthcoming and thoughtful, I facilitated a ninety-minute discussion that journeyed from personal experiences of antisemitism and racism to how Jews are positioned in institutional racism. The ground rules reminded people to listen more and talk less, stay on topic, and value everyone’s input equally, among other things. Each of the participants came with different levels of understanding about white privilege and institutional racism, and different levels of self-reflection on the topic. 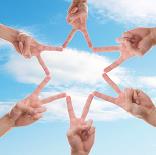 Starting with personal accounts of antisemitism and racism helped to illustrate where each participant was coming from and offered opportunities to understand how individual perspectives are shaped by those experiences. Discussion questions explored implicit and  explicit racial messages about people of color and about being white. The group talked about the similarities and differences between antisemitism and racism, how Jewish historical experience has colored Jews’ sense of place in America’s power structure, and how living with antisemitism and white privilege present difficulties and advantages in working to end racism.

All the participants were Ashkenazi Jews and believed themselves to enjoy the privileges of being white, whether they felt white or not. For some, especially those who had experienced antisemitism, their position of privilege felt tenuous. Others were conscious that they were “passing” as white and benefitted from the privilege that it bestowed on them. Everyone recognized that Jewish persons of color would have very different experiences. There was also general understanding that racism and white privilege is a power construct, and the participants did not want to perpetuate it. That spurred a follow-up discussion about tools for change.

Online resources for advancing discussion of this topic are abundant. The Center for Racial Justice Innovation at Raceforward.org offered a helpful distinction between individual and systemic racism. “From White Racist to White Anti-Racist — The Lifelong Journey,” by Tema Okun of dRworks presents a “ladder of empowerment” that identifies nine stages that white people go through in developing awareness of their relationship to racism and privilege, beginning with innocence and ignorance culminating in community of love and resistance. Another resource is the Leticia Nieto’s book, Beyond Inclusion, Beyond Empowerment: A Developmental Strategy to Liberate Everyone. Nieto’s book presents frameworks for thinking about diversity and working for social justice.

Discussion at the second session spanned the personal, institutional, and political. Participants talked about where they saw themselves on the “ladder of empowerment,” and they explored how being Jewish influenced their responsibility and opportunity to work towards undoing institutional racism. At the institutional level, parents considered how they could advocate and work toward pooling public school Parent Teacher Association (PTA) money to equalize financial support of the PTAs across all schools, better serving all populations. Everyone recognized that this would require giving up some of the benefits of their privilege — which would be hard to do.

The challenge of making change at the political level resulted in the participants intellectualizing the struggle. This is a common way white people get stuck in working to undo racism. The problem appears so big and so out of personal control that people who want to work for change feel overwhelmed. That results in not knowing how to make an impact or thinking that it’s someone else’s problem to solve, which leads to inaction and continuation of the status quo. In our community’s discussion, this response was not recognized as it occurred, and it progressed until it dominated the conversation and became a barrier to deeper discussion about what people can do at an individual or
institutional level. This is where a co-facilitator may have been beneficial. A co-facilitator provides another set of ears, which can help when discussion needs to be redirected. Once there is recognition, then the facilitator can graciously name it and persistently call it out each time
discussion devolves to that. It can be a teaching moment and part of the process of change.

Several components make for a successful discussion on racism and white privilege. Perhaps the most important is having a group of people who want to discuss the topic, or are at least open to the discussion. Leave those who are hostile and indifferent to the professionals.

Even with eager participants, an experienced facilitator is important. Having a facilitator and a co-facilitator can also be helpful in moving the group’s discussion past sticking points and picking up on thoughts that can make the conversation richer.

The group’s composition also plays an important role in the success of the discussion. This type of dialogue is best suited for smaller groups. Between nine and fourteen people attended the two sessions. Some people in the second session didn’t attend the first. Consequently, the group had to double back and cover some ground from the first session during the second one, because the new participants were still thinking through how being Jewish fit in with white privilege. Learning from this, if you do more than one session, I recommend making the first session prerequisite to participating in the second session. I also think the discussion would have been more difficult to manage if people outside the SJC community were invited, because people within the community have a vested interest in maintaining existing relationships.

Talking about the intersection of racism, white privilege, and being Jewish is difficult, but important in our social justice work. It requires careful and thoughtful facilitation, recognizing that discussion participants come to the conversation with different levels of consciousness and understanding about it. It is a topic that is part of a very long journey of exploration and enlightenment, both individually and in society. It challenges us to personally examine how we contribute to something that may be anathema to us. But we must overcome feelings of denial, guilt, and shame to see the structural underpinnings that we must work to change if the power dynamic is to change.

In preparing for the discussions I came across Yavilah McCoy. She is an African-American Jew, teacher, writer, editor, and diversity consultant who founded Ayecha, a nonprofit organization providing educational resources for Jewish diversity and advocacy for Jews of color in the United States. In an interview about the intersection between being Jewish and white privilege, she shared a thought that I will leave you with: “May what we know in our guts help us to be a moral minyan for each other and our nation.” (https://m.youtube.com/watch?v=IbFNkjdHVm0).

3. Nieto, Leticia. Beyond Inclusion, Beyond Empowerment: A Developmental Strategy to Liberate Everyone. Olympia, WA: Cuetzpalin,
2010.