This past Saturday evening, November 7, 2020, I sat with my family watching TV as Vice President-elect Kamala Harris delivered her victory speech. It was the most electrifying moment one could possibly have in the den of a Staten Island home.

Together with the three most important women in my life, my mother, my wife, and my daughter, we witnessed one of the highest glass-ceilings finally shatter. We told my daughter Sakura that maybe she’ll be the one to break through the highest and become the first woman President of the United States. Though, considering she’s not yet five years old, Kamala probably has a better chance to beat her to it. 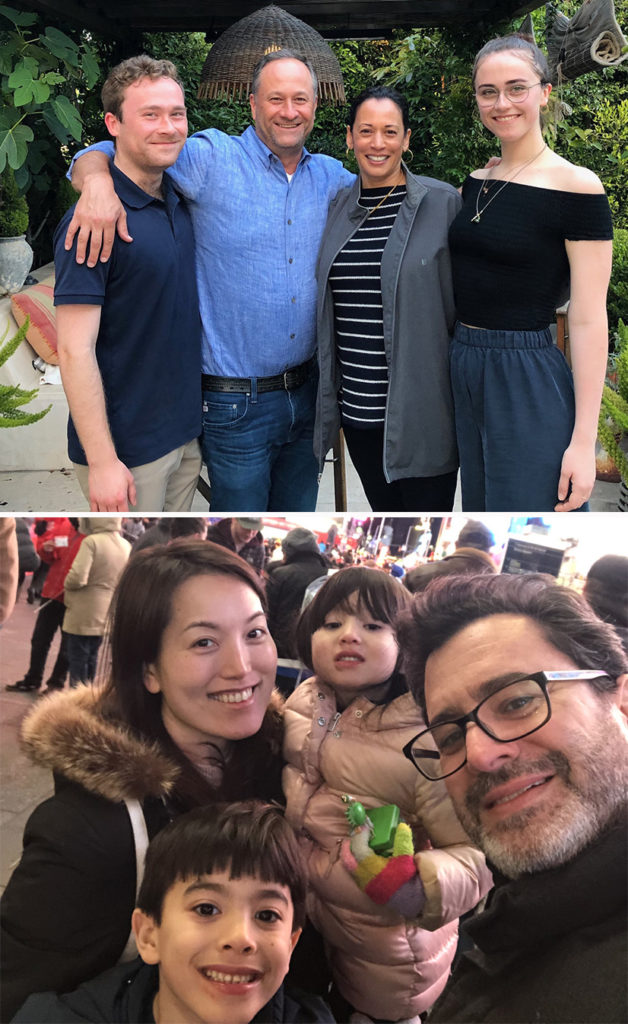 I have no idea whether Sakura will remember the moment—perhaps it will be her first-ever political memory—but I certainly will never forget it. “What’s a president,” she asked? My step-dad offered that it means you get to tell everyone what to do. I could see the glint in her eye, a very appealing job description for a kindergartener who currently only exerts authority over her stuffies.

Besides the obvious excitement about a female Veep (Julia Louis-Dreyfus tweeted “‘Madam Vice President’ is no longer a fictional character”), it was doubly moving for me because of Harris’s family configuration. Quadrupley-moving, actually. She is in a Jewish interfaith marriage, as am I. She is in a multiracial household, as am I. And she has formed loving intergenerational relationships in a blended family, as have I.

On Saturday Night Live later that evening, Maya Rudolph (herself the product of a multiracial Jewish intermarriage) played Harris and joked that with her black and Indian-American background and her husband being Jewish, “we check more boxes than a disqualified ballot.”

Jewish media is mostly kvelling about the incoming first-ever Second Gentleman, Douglas Emhoff. As we all should. Though having worked on issues related to Jewish intermarriage for two decades now, I’ve seen the celebration of high-profile political and celebrity intermarriages, even as the very same outlets condemn interfaith marriage for the rest of us. While working at the Jewish Outreach Institute, the staff would refer to this phenomenon as the “celebrity exception.”

That still happens, and there are still subtle and overt barriers to full inclusion in much of the organized Jewish community for multiracial/intercultural/interfaith households, yet there’s no question that inclusion and acceptance has grown, gradually.

For me personally, it’s been a pleasure to move away from working on the issue pluralistically—accommodating the snail’s pace of the other denominations, trying to help overcome the cultural resistance in synagogue settings, federations, and JCCs—to the Humanistic Judaism movement where we don’t simply “accommodate” intermarriage but celebrate it! And live it!

The overwhelming majority of American Jews would agree with the statement: God doesn’t give a crap whether you marry Jewish or not! It has always been about family, tribalism, cultural transmission, community cohesion and control. In Humanistic Judaism, we can actually call it as it is.

Certainly, some secular Jews like the comfort and familiarity of fellow Jews and have sought out Jewish partners. And that’s great! Others of us embrace the difference and seek the challenge of the unfamiliar. And that’s equally great! The operative word being “equally.” It is also equally great if consenting adults choose all kinds of modern configurations for their relationships, or none at all. We hope everyone finds what they’re looking for in love.

Much of the old stereotypes about intermarriage are falling away as it becomes clear that more people are “marrying in” to the Jewish community than “marrying out,” leading to growth. The Jewish community is able to kvell over Douglas Emhoff because he did not leave his Jewish identity behind to marry Kamala Harris. If anything, she became a part of his Jewish family. Her step-kids affectionally call her Momala, a play on her name and the Yiddish mamaleh.

Shattering the glass ceiling for women is the greatest barrier Kamala Harris has broken—she wore white on Saturday in honor of the suffragettes who paved her way—but for those of us in interfaith, multiracial households, she’s also breaking other barriers as well and we can appreciate it all, regardless of politics.

While Harris now considers herself a Black Baptist, she was raised in both Hinduism and Christianity, and is married to a Jew. As to what the couple really believes theologically, it’s not politically correct to push them on an answer. Until they say otherwise though, I bet they’re humanists!

She’s been in D.C. a while now as a senator, but we hope if VP Harris and Second Gentleman Emhoff suddenly decide to go shul-shopping, they would consider attending Machar: The Washington Congregation for Secular Humanistic Judaism. It may just fit their family perfectly!

Is Being Humanist a Political Statement? What About Being Jewish?
What Humanistic Judaism’s Mission Means To Me