DONATE
Blog
Home Blog In Support of the Full Legalization of Cannabis in the U.S. — Joint Resolution by the Society for Humanistic Judaism and the Association of Humanistic Rabbis

In Support of the Full Legalization of Cannabis in the U.S. — Joint Resolution by the Society for Humanistic Judaism and the Association of Humanistic Rabbis

The following resolution was issued in the Winter 2021 edition of Humanistic Judaism Magazine (preview version here):

Humanistic Judaism values science and the scientific method to better understand our world, and stands for human dignity, equality, and fair treatment under the law for all people. In our nation’s legal approach to regulating cannabis, these values have not been evenly employed, and too often have been disregarded.

Federal laws in the United States regarding the growing, sale, trade, possession, and consumption of cannabis have been informed more by myth and demagoguery than on established scientific data. 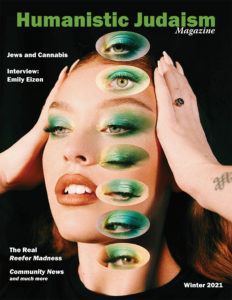 Cannabis laws are not uniform nor uniformly enforced, disproportionately affect communities of color, and make criminals of and cause undue and unjust punishment to many persons for a victimless crime. Our tradition values equal treatment under the law and teaches “do not do unto others as you would not have done to you.”

Laws criminalizing cannabis encourage its use in ways both dangerous to the public and the individual user as did the laws on alcohol prohibition in the United States in the 1920s-30s. Legalizing cannabis advances safety and health by supporting a medical response to health issues, scientific research, and personal rights. It reduces police abuse and government waste. Growing American support for full or partial legalization is currently seen in all but six states.

The Society for Humanistic Judaism and the Association of Humanistic Rabbis therefore call for the following changes in our legal and societal approach to cannabis:

This statement draws inspiration from the 1970 General Resolution “Legalization of Marijuana” by the Unitarian Universalist Association (https://www.uua.org/action/statements/legalization-marijuana).

ACLU Reports: “The War on Marijuana in Black and White” (2013), and “A Tale of Two Countries: Racially Targeted Arrests in the Era of Marijuana Reform” (2020). https://www.aclu.org/report/report-war-marijuana-black-and-white

“Racism and Its Effect on Cannabis Research” by Robert Solomon, National Institute of Health (2020). https://www.ncbi.nlm.nih.gov/pmc/articles/PMC7173675/