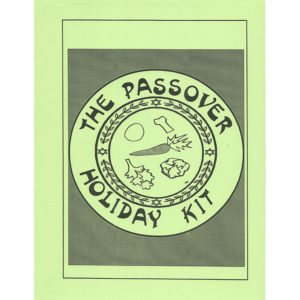 Humanistic Jews continue the tradition of gathering with family and friends for a festive meal called a seder. The celebration emphasizes the themes of human freedom and dignity, the power of human beings to change their destiny, and the power of hope.

At the seder, a humanist haggadah is read, which includes the symbols of the holiday and the legendary tale of the exodus from Egypt. In telling the biblical Exodus story, Humanistic Jews accept that it  is legend, not history. A humanist haggadah can include stories about more modern day exoduses and struggles for freedom, such as the millions of Jews who fled to America and Palestine (and later Israel) to escape persecution in their homeland, the Warsaw Ghetto Uprising against the Nazis, and the successes of the labor, Civil Rights and women’s movements in the twentieth century — all of these events could have a place in a humanist haggadah

Additionally, a humanist haggadah would likely go beyond the listing of the 10 ancient plagues in order to acknowledge the struggles, fears and inequities that “plague” us today, such as racism, terrorism and poverty. And the singing of Dayenu (“it would be enough”) for Humanistic Jews might become Lo Dayenu (“it would not be enough”), changing the message from one of satisfaction to a statement that there is still more for us to do.

A Humanistic seder plate includes the items on a traditional seder plate: bitter herbs (maror), roasted egg (beytsa), parsley (karpas), a lamb shankbone (pesakh), and a sweet mixture of fruit and nuts (haroset). It might also include: