This is a guest post by Patty Becker, written during the SHJ@50 Anniversary Conference in April 2019. A longtime and beloved member of The Birmingham Temple Congregation for Humanistic Judaism in Farmington Hills, MI, Patty sadly died on August 11, 2020. May her memory be for a blessing. 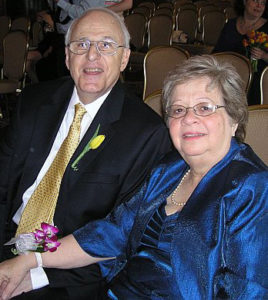 “Today I am ashamed to be a Jew.” Those words, uttered by Rabbi Sherwin Wine on Erev Yom Kippur, 1982, brought me into this movement.

But first, some background. I was raised as a secular Jew, deeply exposed to Jewish/Yiddish culture in the Workmen’s Circle/Arbeter Ring in Detroit. I attended its shule for seven years, where I was taught in Yiddish. My parents were atheists. I wasn’t so sure when I was young, but after my father died of cancer at age 45, when I was 15, it was clear to me that no god could possibly have permitted that to happen. In high school, I became involved in a Zionist Youth movement – Hashomer Hatzair – not because I wanted to make aliyah to Israel, but simply because I needed something Jewish.

During freshman orientation week at the University of Michigan, I went to a Hillel mixer for incoming students. I quickly panicked and walked right out – it seemed to me to be just a big dating pool. My interests in social justice came to the fore instead, and I spent a lot of time with a Christian ministry where everyone knew I was Jewish, and where students were encouraged to engage with the real world. I moved on to Wisconsin for graduate school where I did become involved in Hillel, but the religious part of it never felt right. It’s funny though – one year on Yom Kippur, my roommate and I were making a break fast meal for our friends. I worked all day, but there was still an hour or so to go of the service after that. I slipped in and listened. The values expressed in the siddur resonated with me, but not the god language.

Eventually I returned to Detroit and began developing a career. I didn’t know what to do with my Jewishness. There was no place to be. When I was 31, my husband, Allan, and I connected and became engaged. He was raised Conservative; my mother jokingly called it a mixed marriage. His parents would have been very unhappy if we were not married by a rabbi.

So, we went to see Rabbi Wine. He helped us to design our own, unique, ceremony. This was in 1971.

Allan and I had met in Democratic Party politics, focused locally in our corner of Detroit, and continued that work throughout the 1970s. Our efforts, together with that of many others, elected a Congressman and many other good public officials. We also had a daughter, born in 1974. During that time, being Jewish was less important to us than working in politics. But by 1982, with our daughter entering third grade, we were at “push/shove” time. She needed an external Jewish education. We considered our options – we had a few – but ultimately chose Birmingham Temple. I was persuaded when I read the Sunday School curriculum, which seemed to be just what we wanted our daughter to be learning.

So, shortly after joining, we went to our first service – on that Erev Yom Kippur evening in 1982. It was the day of the Israeli invasion of Lebanon. Rabbi Wine stood before the packed congregation, said that he was putting aside his prepared talk, and uttered those words: “Today I am ashamed to be a Jew.” All I could think was that all over our Detroit Jewish community and far beyond, rabbis were apologizing for Israel. Our rabbi was telling the truth! I was hooked.

I like to say that, over the next ten years, Sherwin gave words to what I felt. I had always been a Humanistic Jew; I just didn’t know that my values could be labeled and categorized “Humanistic.” Being part of this movement for the past 37 years has enriched my life in more ways than I can count. I wish for today’s young people, all those “nones” of Jewish background, that they could experience the joy of bringing their humanistic values together with Jewish culture. Many of them would really like it.