This article was written by Jonathan L. Friedmann, Ph.D., who is a cantor and leader of our Los Angeles affiliate, Adat Chaverim: Congregation for Humanistic Judaism. It originally appeared in the Nov./Dec. 2020 issue of The Freethought Society News, the Ezine of the Freethought Society.

If secular humanism had a seat on the United States Supreme Court its record would be identical to that of Justice Ruth Bader Ginsburg’s. On issue after issue, case after case, Ginsburg grounded her opinions in reason and science, a passion for democracy and human dignity, a dedication to fairness and equality, and jurisprudence devoid of religious dogma or ideology. As Sunil Panikkath, president of the American Humanist Association, remarked upon learning of her death:

Among all the Supreme Court justices in the history of our republic, Ruth Bader Ginsburg ranks alongside Thurgood Marshall as having done the most to advance the humanist ideal of an ethical society with equal rights and equal justice for all, irrespective of their identity.

Bader Ginsburg’s worldview was shaped at a young age. She was born into a working-class Orthodox Jewish family in Brooklyn in 1933. She recalled, as a young girl, seeing a sign outside an inn that read “No Dogs or Jews Allowed.”

Bader Ginsburg’s concern for the disadvantaged was heightened each year on her birthday, when her mother took her to a Jewish orphanage to share blocks of ice cream with the orphans. In eighth-grade, she was dissatisfied with cooking and sewing assignments in her home economics class, and longed to join the boys in shop.

Following her mother’s early death, Bader Ginsburg was told that only males were counted in the quorum (minyan) required for reciting the mourner’s prayer (Kaddish). She decided then that she would live as a secular Jew, committed to the liberal ethical ideals of her culture but removed from the superstition of ritual observance.

Bader Ginsburg graduated from Cornell University at the top of her class in 1954. She was married the same year and had her first child in 1955, shortly after her husband, Martin D. Ginsburg, was drafted into military service. During her first year at Harvard Law School, Martin was diagnosed with cancer. Despite this hardship, the challenges of motherhood, and institutional barriers at the male-dominated school (she was one of nine women in a class of 500), Bader Ginsburg remained a top student. Her husband recovered from cancer, graduated from Harvard, and began work at a New York City law firm. Bader Ginsburg transferred to Columbia Law School, graduating in 1959.

Gender discrimination was rampant in the early 1960s. Her first job, clerking for United States District Judge Edmund L. Palmieri, was secured only after a Columbia professor refused to recommend any other graduates until she was hired. Bader Ginsburg received a few offers from law firms but always at a much lower salary than her male counterparts.

She entered academia instead, teaching at Rutgers University Law School from 1963 to 1972 and then at Columbia, where she became the university’s first tenured female professor.

Until her death on September 18, 2020, Bader Ginsburg was a powerful and consistent voice for humanistic values. During her twenty-seven years on the Supreme Court, she wrote numerous majority and dissenting opinions on cases ranging from gender and voting discrimination to the free exercise of religion and separation of church and state.

Below are some highlights 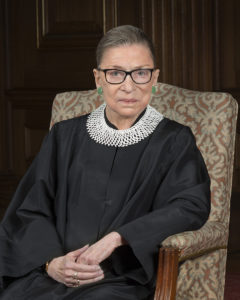 Her first opinion came in the 1995 education case Missouri v. Jenkins. She joined the dissent in condemning the overturn of desegregation plans for the Kansas City, Missouri School District: “Given the deep, inglorious history of segregation in Missouri, to curtail desegregation at this time and in this manner is an action at once too swift and too soon.”

In her majority opinion in United States v. Virginia (1996), which struck down male-only admissions at the Virginia Military Academy (VMI), Bader Ginsburg wrote: “There is no reason to believe that the admission of women capable of all the activities required of VMI cadets would destroy the Institute rather than enhance its capacity to serve the ‘more perfect Union.’”

Bader Ginsburg authored the majority opinion in Olmstead v. L.C. (1999), ruling that people with mental disabilities have the right to community-based housing under the Americans with Disabilities Act: “Institutional placement of persons who can handle and benefit from community settings perpetuates unwarranted assumptions that persons so isolated are incapable or unworthy of participating in community life.”

Friends of the Earth, Inc. v. Laidlaw Environmental Services (2000) case sided with South Carolina residents seeking penalties for industrial pollution without having to prove injury. Bader Ginsburg included these words in her majority opinion: “A would-be polluter may or may not be dissuaded by the existence of a remedy on the books, but a defendant once hit in its pocketbook will surely think twice before polluting again.”

Her dissent in the 2013 voting rights case, Shelby County, Ala. v. Holder, challenged Chief Justice John Roberts’ contention that America had significantly changed since the Voting Rights Act was passed in 1965 and that its enforcement was therefore no longer needed. Her pointed remarks included this gem: “Throwing out preclearance when it has worked and is continuing to work to stop discriminatory changes is like throwing away your umbrella in a rainstorm because you are not getting wet.”

Bader Ginsburg’s dissenting opinion in Gonzales v. Carhart (2007), which upheld the federal government’s Partial-Birth Abortion Act, chided the unprecedented approval of a ban that made no exceptions for a woman’s health. She argued that such restrictions undermine “a woman’s autonomy to determine her life’s course, and thus to enjoy equal citizenship stature.”

Burwell v. Hobby Lobby Stores, Inc. (2014) ruled that for-profit corporations can opt out of regulations on religious grounds — in this case the inclusion of certain types of contraceptives covered under the Affordable Care Act. Bader Ginsburg dissented: “Until this litigation, no decision of this Court recognized a for-profit corporation’s qualification for a religious exemption from a generally applicable law, whether under the Free Exercise Clause or RFRA (Religious Freedom Restoration Act). The absence of such precedent is just what one would expect, for the exercise of religion is characteristic of natural persons, not artificial legal entities.”

American Legion v. American Humanist Association (2019) concerned the forty-foot-tall “Peace Cross” situated on state property in Bladensburg, Maryland. Technically a Latin cross, it was erected in 1925 and was commissioned by the American Legion as a World War I memorial on what was then private land. According to the novel majority opinion, such religious displays are exempt from the First Amendment’s Establishment Clause because their religious symbolism fades with the passage of time. In her dissenting opinion, co-authored with Justice Sonia Sotomayor, Bader Ginsburg wrote:

Contrary to what her critics claimed, Bader Ginsburg’s dissent in the Bladensburg case was not a “radical leftist” attack on religious freedom. Nor did Bader Ginsburg hold animosity toward religion per se. A verse from Deuteronomy was framed on the wall of her Supreme Court chamber: “Justice, justice you shall pursue” (Hebrew: “Tzedek, tzedek tirdof”).

Justice, in its original Hebrew sense, as well as today, means fairness, neutrality, even-handedness, impartiality, and non-discrimination. Bader Ginsburg’s minority status as a Jew and as a woman in a patriarchal system fueled her sensitivities about Christian supremacism and other forms of bigotry and prejudice. As she reflected in a 2018 interview: “It makes you more empathetic to other people who are not insiders, who are outsiders.”

Bader Ginsburg was only the second woman to serve on the U.S. Supreme Court during its 231-year history. The first, Sandra Day O’Connor, served from 1981 to 2006. As of this writing, there are currently two female Supreme Court justices Elena Kagan and Sonia Sotomayor, both appointees of President Barack Obama. The scarcity of women on the court, no matter their political views, was troubling to Bader Ginsburg. Half-jokingly, she said there would be enough women on the nine-seat court when there were nine.

Jonathan L. Friedmann, Ph.D., is the author or editor of 25 books and hundreds of popular peer-reviewed articles. Friedmann is the community leader and education director of Adat Chaverim- Congregation for Humanistic Judaism, Los Angeles. He is also the director of the Jewish Museum of the American West, and associate dean of the master of Jewish studies program at the Academy for Jewish Religion California.

Coming In As A Humanistic Jew: A Christian Minister’s Son’s Story
Is Being Humanist a Political Statement? What About Being Jewish?