an old friend a happy birthday. Not having visited in a while I scrolled down a bit and, to my delight and surprise, was greeted by rainbow-enhanced profile pictures, photos of teens in rainbow accessories posted by their parents, and general wishes for a “Happy Pride Month.” Many of these were from our own members. For someone who spent the first 37 years of life deeply closeted, this was an emotional experience.

On Friday night during our YouTube Pride Shabbat I spoke to Michigan State University Prof. Tim Retzloff about the history of the struggle for LGBTQ rights. The fact that he and many other academics now teach courses about this is in itself remarkable. During our conversation, he reminded me about darker times for LBGTQ people. Times when no one’s children adorned themselves in pride rainbows to the delight of their parents; when “coming out” meant losing family, friends, status, and employment; when even prominent human rights advocates who happened to be gay fearfully kept their own homosexuality in the shadows.

I grew up when my parents and their friends casually threw around words like “faggot.” I endured adolescence in Miami during a vicious backlash – led by “Florida Sunshine Girl” Anita Bryant – against tentative moves to offer legal protections to gay men and lesbians. I entered Reform Judaism’s seminary in 1984 when being openly gay violated school policy (I would later discover that I was far from alone there). These and dozens of other experiences led me to believe that I would never be able to live my life authentically. Fortunately, through the hard work of activists like those we learned about on Friday night, societal attitudes did change. They paved the way for me to come out in 1998.

(Because my story is also my former wife’s story and out of respect for her privacy I would never publicly share details of how that all played out. Suffice it to say that ours was not a happy marriage and that, quite obviously, most marriages like ours burden both the closeted and straight partner. That is why we made the choice to do something better for our children while they were still young. Today she and I – and Arthur! – share the pride of having reared two wonderful women and the joy of jointly grandparenting two adorable little ones.)

My time of coming out, even with the upheaval of a divorce, was one of what I can only call liberation. I felt that I was finally free, no longer needing to hide who I was. Free from what, you may wonder. Free from shame.

From my earliest days of self-awareness, I – like most other queer people my age and older – endured life in an environment of hate and intolerance that taught us to live in shame. Even after I came out there were those who sought to push me backwards, to devalue and humiliate me because of my orientation. When I applied to work at the JCC in Miami my prospective boss was approached by a prominent local rabbi who made it his crusade to prevent my employment. This time, however, people rose to my defense. As small-minded people like him slowly entered the minority, thousands and then millions of people also emerged from their closets of shame. 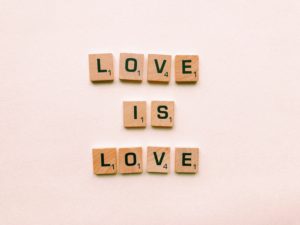 Shame itself is the reason for a month dedicated to pride. I’m sure you’ve heard the perpetual questions of the haters: “What are you so proud of?” and “Why isn’t there a straight pride parade?” The answers should be obvious. It’s because our society never shamed straight people. Straight youngsters never stayed up at night, contemplating suicide, because they were humiliated by their crush on someone of the opposite sex. Straight youth never grew up hearing that should they want to be teachers or counselors or clergy they were violating the laws of God and nature, posing a threat to the youngsters around them.

Today, though in decreasing numbers, there remain many young people who are subjected to such messages. Much of their shame comes from conservative religious traditions that seek to cure them through “conversion therapy,” a tool of torture now outlawed in many places. And even as tolerance and respect grow for gays, lesbians, and bisexual people, basic protections can be elusive. Michigan, for one, continues to lack employment and housing rights laws. On top of all this, trans people increasingly find themselves the target of conservatives working overtime to limit the rights of this small and vulnerable group of people. These examples serve as a reminder that no matter how far we’ve come there is still much ground left to cover. All of this is the reason that LGBTQ people – and their growing cadre of allies – take each June to say no to humiliation and degradation.

As humanists we place the worth and dignity of all people at the pinnacle of our value system. The goal of this rainbow-festooned month is to remind us that every child deserves to grow up conscious that they are deserving of such dignity.

That they are worthy of living their lives with pride.