This is a guest post by Victoria Ratnaswamy, a member of Kol Hadash Humanistic Congregation and Vice President of the Society for Humanistic Judaism, shared at the April 2021 Board Meeting. 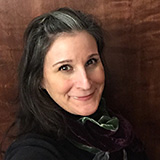 The Society for Humanistic Judaism Mission Statement approved by the Board in 2021:

The Society for Humanistic Judaism inspires, organizes, and advocates for secular individuals and congregations to celebrate Jewish identity and culture independent of supernatural authority and aligned with the values of Humanistic Judaism.

A bit about my personal path here to this mission…

For someone like me, who had never belonged to an organized Jewish community, joining one wasn’t an obligation.

My background was a sort of secularly Jewish home – Jewish identity, but without the education, without organization. My exposure to traditional congregational Judaism was always out of context and a bit alienating. I didn’t know what was going on, and I wouldn’t even have known what to ask – I’m not sure I was interested.

But I was attached to and enjoyed the cultural pieces, and I felt a sort of loyalty and responsibility to my Jewish heritage and identity – as opposed to what I perceived as just letting it go and being swallowed up and somehow silenced by a majority.

I had conceptualized Jews either believers participants, or non-believers and non-participants (except as occasional attendees). I even thought I might be the only one who thought like me – not a religious believer, not willing to go through the motions, but I still wanted to find a way to learn, share, and celebrate with my family. So when my children were little, I thought I’d teach them in my own way – at Hanukkah, for example, we’d light candles, read stories, eat latkes, and talk about the Hanukkah story as a story – not as something that actually happened. Then we’d think about what lessons from the story were still important to us today and discussed our own ideas. And in this way, I invented Humanistic Judaism.

Imagine my surprise about 16 years ago when I became aware of Humanistic Judaism. There was an entire non-theistic Jewish movement where it was important to everyone to say what we mean, mean what we say, and to live those values. It was meaningful, there was integrity, and I could be proud of what we were doing.

We were welcomed and expected to ask questions, and to share our full identities. My entire family was embraced and valued just as we are. We’ve been afforded so many opportunities that we just couldn’t have experienced anywhere else.

That’s my story of how I arrived here with this mission and with all of you thoughtful, compassionate, fun, and beautiful people.

In Support of the Full Legalization of Cannabis in the U.S. — Joint Resolution by the Society for Humanistic Judaism and the Association of Humanistic Rabbis
A Statement on Sexual Ethics for the 21st Century