Sukkot — Why We Celebrate

The following was written by Rabbi Jeffrey Falick:

The origins of Sukkot lie in the dawn of Israelite civilization. The Sukkah booth originated as a temporary harvest dwelling, permitting farmers to remain close to their crops. The Torah’s authors later imagined that they housed the Israelites as they wandered the wilderness.

The Hebrew Bible claims that King Solomon dedicated the First Temple on Sukkot. It was a busy holiday in the Temple with priests sacrificing seventy bullocks over the course of the holidays. In a nod toward universalism, the bullocks were said to honor the mythological “Seventy Nations of the Earth.” 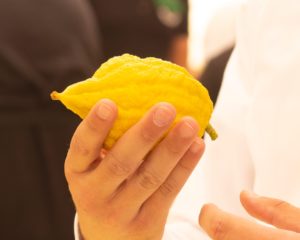 The Lulav and the Etrog are the second great symbol of the holiday. They are actually comprised of “Four Species.” The Lulav is a palm frond accompanied by three sprigs of myrtles and two of willows. The Etrog is a citron, native to Israel and described in the Torah as “the fruit of the goodly tree.” They are taken together and waved to symbolize gratitude for the harvest. Traditional Jews parade them in synagogue processions throughout the holiday.

Sukkot is also known as Chag He-Asif – The Festival of the Harvest. The name recalls its origins. The Rabbis of old simply called it THE holiday. Sukkot is the only festival mentioned in the Torah that is accompanied by a call to rejoice.

Miriam Jerris is the rabbi of the Society for Humanistic Judaism.