[Excerpted from Natan Fuchs in “Here is Our Light: Humanistic Jewish Holiday and Life-Cycle Liturgy for Inspiration and Reflection,” pp. 53-54. For a printable PDF of this excerpt, please click here.] 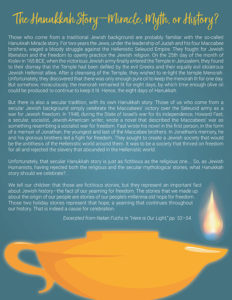 Those who come from a traditional Jewish background are probably familiar with the so-called Hanukkah Miracle story. For two years the Jews, under the leadership of Judah and his four Maccabee brothers, waged a bloody struggle against the Hellenistic Seleucid Empire. They fought for Jewish liberation and the freedom to openly practice the Jewish religion. On the 25th day of the month of Kislev in 165 BCE, when the victorious Jewish army finally entered the Temple in Jerusalem, they found to their dismay that the Temple had been defiled by the evil Greeks and their equally evil idolatrous Jewish Hellenist allies. After a cleansing of the Temple, they wished to re-light the temple Menorah. Unfortunately, they discovered that there was only enough pure oil to keep the menorah lit for one day. But somehow, miraculously, the menorah remained lit for eight days, by which time enough olive oil could be produced to continue to keep it lit. Hence, the eight days of Hanukkah.

But there is also a secular tradition, with its own Hanukkah story. Those of us who come from a secular Jewish background simply celebrate the Maccabees’ victory over the Seleucid army as a war for Jewish freedom. In 1948, during the State of Israel’s war for its independence, Howard Fast, a secular, socialist, Jewish-American writer, wrote a novel that described the Maccabees’ war as something resembling a socialist war for freedom. Fast wrote his novel in the first person, in the form of a memoir of Jonathan, the youngest and last of the Maccabee brothers. In Jonathan’s memory, he and his glorious brothers led a fight for freedom. They sought to create a Jewish society that would be the antithesis of the Hellenistic world around them. It was to be a society that thrived on freedom for all and rejected the slavery that abounded in the Hellenistic world.

We tell our children that those are fictitious stories, but they represent an important fact about Jewish history—the fact of our yearning for freedom. The stories that we made up about the origin of our people are stories of our people’s millennia-old hope for freedom. Those two holiday stories represent that hope, a yearning that continues throughout our history. That is indeed a cause for celebration.