This is a guest post by Jodi Kornfeld,  Rabbi of Beth Chaverim Humanistic Jewish Community in Deerfield, Illinois. The Unwritten Eulogy was first presented at the International Institute for Secular Humanistic Judaism’s end of the year 2020 program, “Covid HaMet.”

I traffic in ritual; words are my currency. 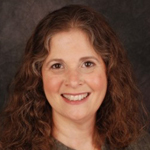 My aims are both lofty and personal,
Give meaning to those intersectional moments where the present confronts its past and navigates its way into the future.
Let the generations join together even as they necessarily and inevitably move apart.
Yes, I traffic in ritual; words are my currency.

But now I stutter and stammer because my stockpiles have dwindled.
The silos have emptied and the vats have drained.
Unlike Joseph, I Yosepha did not prepare for this.
So swap the first two letters in ritual, then add a “V” and here we are.
A Brady Bunch screen with someone I’ve never met next to my father in his ICU bed.
Did he give a thumbs up acknowledging our voices one last time, hearing our expressions of love and gratitude; or did she make that happen?

This is the unwritten eulogy, the failed ritualization of loss and memory.
When words are unspoken, they never reach their audience.
They remain vague unformed thoughts seeking the release of articulation.
The raw materials remain without the opportunity to become something.
The inability to weave together the strand of memory with that of loss; the one of hurt with the one of forgiveness; and the thread of joy with that of sorrow, means that no new fabric emerges; no textile of reconciliation.
Instead there is a pain and profound isolation that is even deeper because
I traffic in ritual and words are my currency.

This is the shiva never held.
“For the greater good; for the safety of all; due to the pandemic” are recurring phrases in obituary after obituary after obituary.
But those words give way to the realization that no stories will be shared, no ameliorative laughter will be brought forth.
There are no hugs possible.
We are back to swapping those first two letters and adding a “V”.

So indulge me this, let me untangle a difficult and complicated relationship.
Let me honor the dead in the pandemic, “Covid ha-met,” and honor my father, “Kavod avi.”

In the days immediately after his birth, he was on display in the 1933 World’s Fair in Chicago to showcase the then newest technology, a neonatal incubator, because he weighed only two and a half pounds.
He was fond of saying “I was very young when I was born,” an aphorism that elicited laughs but which my sister and I only just recently fully appreciated.
He grew up in poverty in the Depression, the son of a fruit peddler on the West Side.
Later he’d say, “Did you have enough to eat?” as he offered everyone second portions from the excess food he bought.
He was a one strike person in a three strike world.
He could and did hold a grudge with the best of them, oblivious to the pain it caused; but paradoxically was also generous to a fault.
Whatever missteps he took as a father, he corrected as a grandfather.
He died alone in a hospital room in the pandemic of 2020 with someone I never met next to him.

This then is the unwritten eulogy because I traffic in ritual and words are my currency.

This poem is reprinted from the Winter 2021 issue of Humanistic Judaism Magazine with corrections.
March 19, 2021