This article was published in the Summer 2022 Issue of Humanistic Judaism Magazine. It was written by Isabel J. Kaplan, Psy.D., a clinical psychologist in private practice in Scarsdale, NY and a member of the Board of Trustees of The City Congregation for Humanistic Judaism since 2000. She has served in many roles including KidSchool administrator and Co-president, and is currently the Director of the B Mitzvah program.

“Does it really count as a B Mitzvah if there isn’t a Torah reading?”

The answer to this question is a resounding “yes,” as evidenced by 130 meaningful City Congregation B. Mitzvahs over the last 25 years. When the program was conceived by Myrna Baron and Rabbi Peter Schweitzer, TCC’s founder and first rabbi, respectively, they felt that a Torah reading might not be the most meaningful route to achieve the goals of the program, which were, in part, to deepen the student’s Jewish identity and strengthen their connection to Judaism and the Jewish community in the broadest sense.

Instead, the pair developed the concept of the Major Project, which is the centerpiece of the TCC B Mitzvah service. In addition to presentations on family values, heroes and role models, and community service, each student selects a topic of their choice to research in depth. Any idea that has a connection to Jewish culture, history, observance, or language is acceptable as long as the student emphasizes the Jewish connection. By allowing the student to choose a topic for which they have an interest or passion, the assignment takes on meaning and significance that a Torah portion often does not offer. 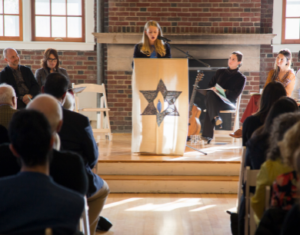 B Mitzvah of Isabel Lubinsky at the City Congregation for Humanistic Judaism. Photo by Katie Milford.

As Humanistic Jews, we view the Torah as an important foundational document, but one that does not hold primacy or automatic authority above all other writings that encompass Jewish literature. As such, there is no need to require students to devote a major portion of their B Mitzvah training to study it if it doesn’t hold an intrinsic appeal. To be sure, we have had students over the years choose to analyze a Bible story from a humanistic perspective because it aligns with their interests, but not because it aligns with their 13th birthday or is required.

At TCC, the major project is an eight-to- nine-page research paper or presentation that can take a number of different forms including PowerPoint, video, and creative writing. In all cases, the work is grounded in solid research and genuine student interest. It’s not unusual for a student to begin with one topic only to reject it once they learn more, and choose another. Each student meets with the rabbi to discuss potential topics and resources for information. Once a topic is approved, the student works with their mentor to break down the topic into manageable parts and proceeds to develop their ideas.

While the topics vary widely, they often fall into categories such as: Jews from various parts of the world (Brooklyn, Ireland, Morocco) that have meaning to the student because of their own family histories or travels; Jews in various professions (scientists, inventors, musicians, artists, politicians, philosophers, writers, composers, comedians); the history and details of iconic Jewish foods (gefilte fish, challah, delicatessen foods, matza balls, Sephardic and Ashkenazi cuisines); historical events in the life of the Jewish people (Masada, various aspects of the Holocaust, Ladino Jews); aspects of Jewish observance (kashrut, comparing denominations, elements of Humanistic Judaism); historical and current events in Israel (biblical criticism, Israeli-Palestinian conflict); and aspects of Jewish identity (interfaith and interracial experiences, genealogy discoveries, intersectionality). (To see the range of topics that have been researched, or to read some presentations, go to https://citycongregation.org/bar-and-bat-mitzvah-major-project-papers/ )

In their final papers, the students reflect on their experiences going through their B Mitzvah preparation, and they often comment on the sense of accomplishment they feel having delved deeply into a topic and becoming an expert. They can achieve a surprising level of mastery and, indeed, become our teachers that day.

The In-Between Spaces
Starting a Havurah