What Humanistic Judaism’s Mission Means To Me

This is a guest post by Bill Parsons. Each semi-annual meeting of the Society for Humanistic Judaism (SHJ) Board of Directors begins with one director reading the organization’s mission statement and providing a personal commentary on it. Below are the comments Bill delivered at the board meeting on Saturday, November 14, 2020:

Shabbat Shalom. For those of you who don’t know me, my name is Bill Parsons, and I’m Vice President of Or Adam in Phoenix, where I’ve also been responsible for safety at our public gatherings since the most-recent rise of anti-Semitism, in 2016.

I need to warn everyone, up front, that my son’s Zoom cello lesson is about to begin three rooms away, so please remain calm if you hear what sounds like someone strangling a walrus. 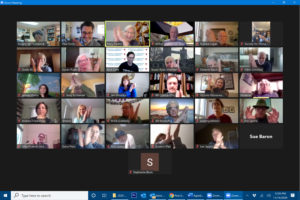 SHJ Nov.2020 Board Meeting via Zoom

When Miriam asked me to read the mission statement, and to comment on it in a personal way, my two immediate thoughts were of family and connection.

My maternal grandmother was one of fourteen children, her oldest brother born in 1881, and she, herself – the youngest girl – born in 1909. I often think my great grandmother’s life must have consisted almost entirely of cooking, punctuated (only briefly) by the relative respite of giving birth.

Her children were extremely close, and remained a tight-knit group their entire lives, all residing in the Midwest, never more than a day’s buggy ride – or, later, car ride – from each other.

As a child, I spent summers and school breaks traveling, staying for days or weeks at a time with my grandparents, great aunts, great uncles, and cousins. Mine was a large, extended family, always welcoming and glad to see me, year after year.

Some lived in the city, and some lived in the country, but one thing they all shared was a strong religious identity, and from an early age, two inescapable realizations dawned on me: First, that religion played a central, organizing role in their lives; and second, that I found their belief in the supernatural utterly incomprehensible.

They were always patient with my questions, but the more they explained this God fellow, the less plausible he seemed to me. For years – as a guest at holiday meals, Friday night gatherings, and religious services – I felt there was something wrong with me: An inability to share a belief that seemed so innate to everyone else.

My parents were both academics, and maintained a secular household, so we rarely discussed the traditions or beliefs of my mother’s family at home, but I tried to believe – really tried to believe – in the worldview that defined my grandparent’s generation.

By the time my childhood ended, few of them remained. I moved West, and lost touch with them. I built a career, married, and became a parent, and the idea of anything supernatural or “revealed” remained increasingly absurd to me.

Ironically (or maybe not so ironically), my longing for connection, for the family celebrations and traditions and culture of my childhood – even the foods and humor and Yiddishisms – seemed only to grow with each passing year.

When my own young son began to ask questions about the little boy in old family photos, surrounded by all those men at holiday tables, I reflected on asking the very same questions at his age. I tried to explain the High Holidays and Pesach and Hanukkah, but from a secular perspective.

By the time he began receiving B Mitzvah invitations from my wife’s nephews and nieces, it became clear that Judaism – in one form or another – was planning to play a recurring role in our lives. Humanistic Judaism, it turned out, offered a near-perfect compromise.

As a child, I had no idea that Humanistic Judaism even existed; as a parent, I’m truly grateful that it offers an opportunity for my son that my wife and I never had.

By celebrating “Jewish identity and culture, consistent with a humanistic philosophy of life, independent of a supernatural authority”, I can share with him the richness of our Jewish inheritance – but without any baggage.

I can participate in many of the same holiday observances and traditions that I remember from my childhood, but without betraying my humanist integrity.

The SHJ has allowed my family to celebrate the very best of Judaism – the values, the ethics, the history, the literature, the music, the role in healing our broken world – within a larger community of other families just like ours.

I once thought that organized Judaism was only for believers; I now understand that Humanistic Judaism offers people like us a Jewish community untethered from theism, free from its language and constraints.

I’m grateful to the SHJ, and for its mission of organizing and supporting communities like my own Or Adam in Phoenix, and providing a worldwide voice for members like me, my wife, and our son.

I’m also grateful for Rabbi Wine’s vision, and to all those here today – including some who go back to the beginning – who give life to the words of that mission statement.