DONATE
Blog
Home Blog Why I Wear a Humanistic Tallit

Why I Wear a Humanistic Tallit

This article was published in the Fall 2022 Issue of Humanistic Judaism Magazine. It was written by Dr. Jerid Morisco, a rabbinical student at the IISHJ and the Director of Education for the Secular Jewish Circle of Puget Sound.

Judaism has a rich and powerfully meaningful tradition spanning millennia. As Humanistic Jews, we understand that Judaism has and continuesto evolve and adapt to historical events, culture, and the needs of people. The way individuals and communities live and express their Judaism continues to change. Our human- centered philosophy     reminds us to embrace the traditions of our people while adapting those traditions, so they are truly meaningful. Humanistic Jews continue to identify and connect with many traditions and practices adapting them to reflect our human-centered approach. 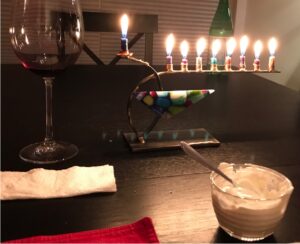 Ritual and ritual objects have played a significant role in helping us to express our human condition, experience life cycle events, and mark the passing of time and seasons. The ritual of celebrating Hanukkah and the ritual object of a hanukkiah served as the entrance point for me to adopt Judaism. Whenmy neighbor Roberta died, I needed a way to celebrate her life and mourn her death. Roberta was a bigger-than-life character who would yell from adistance, “Come give your Jewish grandmother a hug.” She was an ever-present part of our lives for over ten years, and her loss left an empty place in myheart. Every year during Hanukkah, she had a 1970s-era yellowed plastic electric hanukkiah in her window, and each night she would screw in another orange bulb to mark the eight days of Hanukkah.

The window was empty the December after Roberta’s death, symbolizing the empty place in my heart. I broke down and cried. Realizing how that old plastic object connected me to Roberta, I formally honored her the following year by celebrating Hanukkah in her memory. I discovered Rabbi Adam Chalom’s A Home Hanukkah Celebration and purchased a beautiful Gary Rosenthal hanukkiah – my first ritual and ritual item. The eight-day celebration was a transformative life event as the lights had shined “through our love and our tears.” On the last night of Hanukkah, I didn’t want to “let the light goout.” Did I have to wait another year to light a candle? What else does Judaism have to offer? Would I find meaning through other rituals? 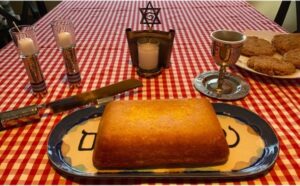 Instead of going out to party on Friday evenings, my spouse and I have always stayed home to celebrate the end of a hard week and have a time of rest and rejuvenation – you know where this is going. While exploring Judaism, I discovered a label for what we had already been doing for years – Shabbat. We found ameaningful ritual to encapsulate our end-of-week celebration as we enter a day of rest. We also discovered a love for challah, though we sometimes bake cornbread in a black iron skillet to honor my grandmother. When my dear friend singer/songwriter Shelley Segal was traveling through Atlanta, she gifted us ourfirst Kiddish cup, another ritual object filled with meaning and connection.

As I continued to explore and connect with Judaism, Humanistic Judaism specifically, I found its rich tradition resonated with my being. Jewish holidays, rituals, and ritual items transformed otherwise ordinary seasonal life events into extraordinary expressive experiences. I felt myself becoming Jewish and wanted to formalize it. Rabbi Miriam Jerris helped guide my adoption into Judaism, culminating in a formal Adoption/Havdalah ceremony at the SHJ 50th Anniversary conference at the Birmingham Temple, now known as the Congregation for Humanistic Judaism of Metro Detroit. Rabbi Denise Handlarski helpedme to write a mikvah ritual affirming my Jewish identity, which I experienced at the Metro Atlanta Community Mikvah shortly after my adoption ceremony. The adoption ceremony emotionally formalized my becoming a member of the Jewish family, and the mikvah experience was so meaningful that my happy tears added to the pool of living waters.

The Tree of Life synagogue mass shooting on October 27, 2018, was a landmark moment in my Jewish identification. In preparation for my adoption, I knew I would be asked, “Do you affirm with an open and joyful heart that you identify with the history, culture, struggles, triumphs, and future of the Jewish people?” I interpreted this as not only identifying with Humanistic Jews but alsoidentifying with the entirety of the Jewish people. I seriously contemplated the question. The Pittsburgh synagogue shooting was thefirst time I fully grasped the meaning of what I would affirm. MY people were attacked. Their struggle was my struggle. Their future was my future. That was the moment I knew 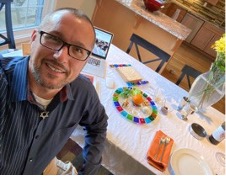 how I would answer the question. As an openly Secular Humanistic Jew, I do not typically wear a kippah but understand that some Jews feel obligated to do so. I can choose whether to identify as Jewish publicly; they cannot. Knowing that the Star of David and the kippah are the most recognizable signs of Jewish identity, the following morning, I pulled my Star of David from inside my shirt andwore it out, and I wore a kippah in public for several weeks. I stood in defiant solidarity with my Jewish family. When Rabbi Miriam formally asked me the question during my adoption ceremony the following April, from the depth of my being, I was able to respond, “My heart does.” I continue to wearmy Star of David outside my shirt daily and find that wearing a kippah sometimes proudly connects me with the history, culture, triumphs, and future of the Jewish people – MY PEOPLE.

My Jewish journey included visiting synagogues representing every major branch of Judaism. Regularly, I saw the rabbi in theistic congregations wearing a tallit from the bimah. When attending a Yom Kippur Yizkor service at a Reconstructionist synagogue in Atlanta, I saw families gathered under a tallittogether, connecting with the memory of a loved one. Humanistic Jews use the term “Nizkor” – “We will remember,” instead of the theistic “Yizkor” – “MayGod remember,” which is yet another way we have adapted a ritual to meet our needs meaningfully. I wanted to explore why this ritual item was so meaningful to them. Many families have tallitot passed down from generation to generation. Some families I witnessed huddled under the tallitformerly worn by the person they were remembering, and it was a tangible way for them to connect with a lifetime of memories. The theistic significance of the tallitwas lost to me, but the human connectedness through it was mighty. Would I find meaning through a tallit? 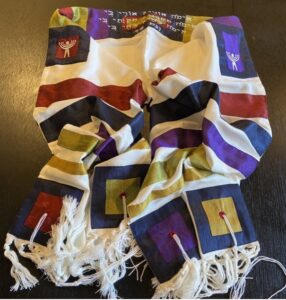 The first three words on the atara (neckband) of many tallitot are “Baruch atah Adonai” – “Blessed are You Lord,” with which I did not connect. However, Rabbi Miriam’s clergy stole includes words from Sherwin Wine’s Ayfo Oree, which are very meaningful to me. For the Shabbat blessing, we can replace “Baruch atah Adonai” with “Baruch haor baolam” – “Radiant is the light in the world.” Likewise, we can make the atara meaningful with Sherwin Wine’s poem,“Where is my light? My light is in me. Where is my hope? My hope is in me. Where is my strength? My strength is in me. And in you.” I then learned that the tzitzit strings and knots equal 613 to represent the number of commandments, which was meaningful to me. As a Humanistic Jew, I understand the Torah as a foundational document that has heavily influenced culture around the world. I continue to read, explore, and understand it through a Humanistic lens.

I can embrace some of its teachings while discarding or even being in total opposition to others. While some may view the tzitzit as being a constantreminder to obey God’s laws, I view them as a reminder that the Humanistic part of my Judaism requires that I not blindly follow a set of rules but intellectually discern the validity of each one knowing that I am ultimately responsible for my behavior and the choices I make. Yes, the tallit has become meaningful and another way of embracing my Jewish identity.

Through discussions with others, I’ve learned that some rituals and ritual items can trigger memories of bad experiences, and somestill connect various items with their theistic meaning. As an adoptee, I see Jewish rituals and ritual items from a different and hopefully fresh perspective. I continue to ask what else Judaism has to offer. What meaning did Jews throughout history find in aparticular ceremony or ritual item that caused them to pass it from generation to generation? As Humanistic Jews, we understand there must have been some deep human meaning. May we together embrace a Judaism that continues to evolve and adapt to historicalevents, culture, and the needs of people. May we continue to explore meaning making through Jewish rituals and ritual items and adapt them to be deeply meaningful to us as we continue to explore all that Judaism has to offer. It’s all ours!