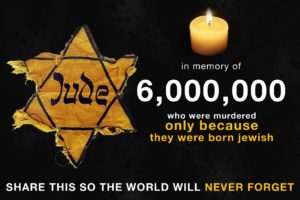 Yom HaShoah (Holocaust Memorial Day) commemorates the systematic murder of six million Jews by Nazi Germany during World War II and the destruction of their culture.

Humanistic Jews dedicate their observance of Yom HaShoah to the murdered six million, lighting candles in their memory, and honoring the courage of all who suffered and resisted.

Believing that the the Holocaust is the ultimate testimony to the absence of a just God, Humanistic Jews feel that the most appropriate response to the Holocaust is to intensify the quest for the freedom and dignity for all people.