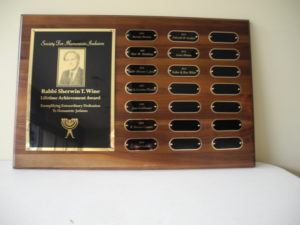 The Sherwin T. Wine Lifetime Achievement Award is presented annually to individuals who have “over the years, exemplified extraordinary dedication, devotion, adherence to, and activity in the Secular Humanistic Judaism Movement and the philosophical doctrines enunciated by the Movement’s founder, Rabbi Sherwin T. Wine.” The award, established by SHJ and Kol Hadash, Northern California, past president Bert Steinberg in 2003 in honor of Wine’s 75th  birthday, represents Steinberg’s heartfelt gratitude at finding a Humanistic Jewish community that reflected his lifelong philosophy and unfulfilled need. Steinberg joined SHJ and became bar mitzvah at the age of 72 under Wine’s tutelage.

A permanent plaque bearing the image of Rabbi Sherwin T. Wine is on display at the SHJ’s headquarters in Farmington Hills, Michigan. A smaller replica is given each year to the recipient, along with a personal gift of Judaica. 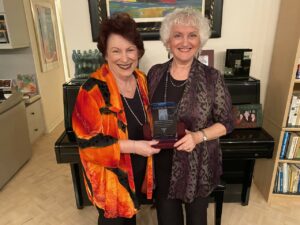 Rabbi Eva Goldfinger, Life Cycle Coordinator and Adult Educator at Oraynu Congregation has dedicated close to 40 years of her life to support a movement that articulates her values and approach to Jewish identity. Every arm of the Secular Humanistic Movement has benefited from her knowledge, wisdom, creativity, incomparable organizational skills, empathy and passion. Eva was a graduate of the first class of the IISHJ Leadership Program and was ordained as a rabbi in 2005. To see her ordination address, click here.  She served on the SHJ Board for almost a decade. She also serves as the Canadian Director of the International Institute. Rabbi Goldfinger is the author of Basic Ideas of Secular Humanistic Judaism,  one of the seminal texts used in teaching Humanistic Judaism, and for those who want to understand the roots and elements of our philosophy. She has created educational programs for both B Mitzvah and those who want to Adopt (convert to) Judaism. Eva has shared the fruits of her research and labor , including examples of life cycle ceremonies generously with the movement leadership.  To watch the award presentation, click here. 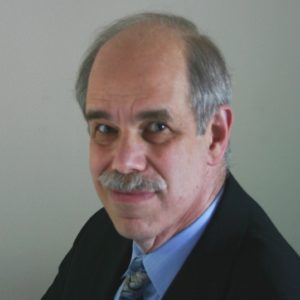 Cary Shaw, a member of the Congregation for Humanistic of Fairfield County, CT, epitomizes the kind of person that is worthy of this honor. Cary served on the SHJ Board for more than a decade and was responsible for many innovative programs, including the Humanistic Jewish Role Model of the Year program. A serious thinker by nature he drafted the congregational principles followed by CHJ. His dedication and his generosity to Humanistic Judaism is exemplary. We are very lucky to have him as a part of our movement. Rabbi Jerris, in presenting the award to Cary, characterized him “as kind and caring, a wonderful storyteller, with a distinctive sense of humor.” Cary is the current president of the Humanists and Freethinkers of Fairfield County. This organization sponsors an annual Darwin Day Dinner, In February of 2020 Cary offered a Secular Invocation before the Connecticut State Senate.  His energy abounds and Humanistic Judaism has been the recipient of many great gifts as a consequence.  To watch the award presentation, click here. 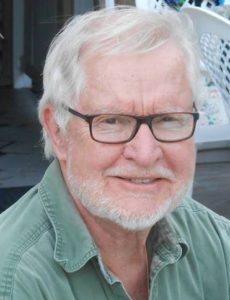 Richard Logan, a member of Or Emet in the Twin Cities, MN, has served on the SHJ Board for the better part of a decade. Willing to step into the presidency in a time of need after only a short time on the Executive Committee, Richard came to us with his love of Humanistic Judaism, his passion and sense of humor, and the lessons he learned as the recent past president of Or Emet. Richard was raised in Vermont, the son of a Methodist minister, and earned his PhD in human development and undergraduate degree in anthropology. In presenting the award, Rabbi Jerris described Richard as “the ideal model of a visionary, intelligent, energetic, compassionate, and quirky leader of the Society for Humanistic Judaism and the movement.” Richard maintains that being president of SHJ and Or Emet and the recipient of the Sherwin T Wine award are the greatest honors of his life. 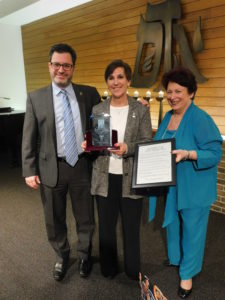 Andrea Friedlander, a member of Kol Hadash Humanistic Congregation in Lincolnshire, IL, served on the SHJ Board and Executive Committee from 2009 to this day, and as President from 2012-2014. In describing Andrea’s accomplishments and contributions, Rabbi Miriam Jerris highlighted Andrea’s generosity with time and energy, her work ethic, her persistence, and her patience with others as characteristics that enabled SHJ to overcome some of the most difficult challenges a non-profit organization faces. Andrea always maintained her good humor and rationality, and her friends on the board were always grateful to her for her friendship and the case of wine she brought to every meeting. In accepting the Lifetime Achievement Award, Andrea cited the friendships she forged as the most significant reward of her involvement in SHJ. 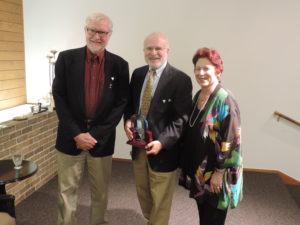 Larry M. Lawrence, a member of Machar, The Washington Congregation for Secular Humanistic Judaism in D.C., served on the SHJ Board and Executive Committee since 2010, as a Member at-large, Vice President, President and Past President. He currently serves as the chair of the Finance Committee and the Nominating Committee.  Larry served the SHJ during very challenging times. His dedication and commitment to transparency and financial integrity are the hallmarks of his tenure on the SHJ Board. In her presentation Rabbi Miriam Jerris proclaimed that Larry Lawrence demonstrated incomparable dedication and commitment to the Society for Humanistic Judaism and the movement and exemplified serious preparation and unmitigated competency in the work he did for the Society, making him a most worthy recipient of this award. 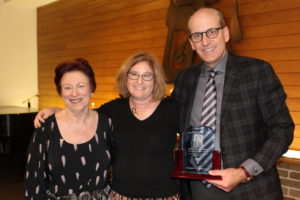 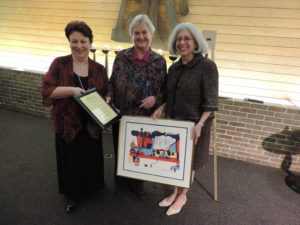 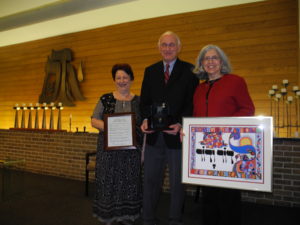 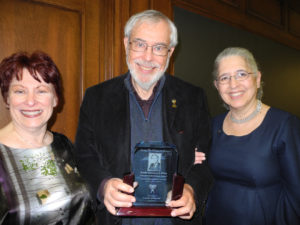 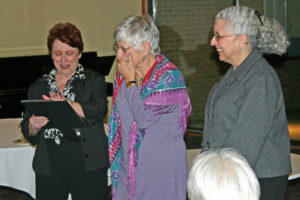 Deb Godden, a madrikha and a member of Machar, Washington Congregation for Secular Humanistic Judaism, was the long-time SHJ Secretary. At Machar she used her skills to create a booklet for Shabbat and served as the ceremonial leader in the rabbi’s absence. As the chair of the SHJ Education Committee and a technological guru ahead of her time, she established online resources and led the way for educators to communicate with one another about their Sunday school work through an educators’ listserv. Deb improves the community and the world everywhere she goes, reaching out to many aspects of the community to share her passion for and knowledge of Humanistic Judaism. 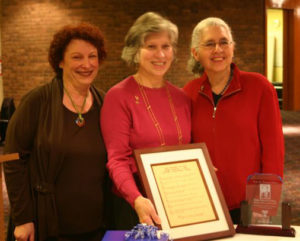 Bonnie Cousens is the Executive Director of the Society for Humanistic Judaism and the Managing Editor of its journal, Humanistic Judaism. She is a Madrikha (professionally trained clergy), a member of the Boards of Directors of the International Institute for Secular Humanistic Judaism and the Secular Coalition for America. Bonnie’s commitment, dedication, and participation in so much of what the Humanistic Jewish Movement does establishes her as the most reliable source of corporate memory the movement has. Her organizational talent, superior analytic ability, and wise counsel helped professionalize the movement organizations for more than three decades. In presenting the award it was noted that Bonnie Cousens lives her values and commitments in deed as well as word. She puts her entire being into promoting and securing the future of Humanistic Judaism. 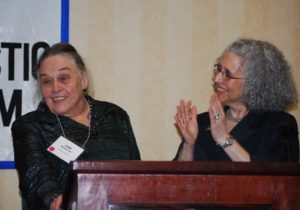 Jane Goldhamer was the founder of Kol Shalom Community for Humanistic Judaism in Portland, Oregon. Meeting Sherwin Wine at a lecture in Dayton, Ohio, in 1978, Jane and her husband, Mike, joined the SHJ immediately as individual members. After moving to Portland in 1985 and finding no Humanistic Jewish option, Jane and her family joined a reform congregation, but when she received notice of a SHJ Western Regional Conference to be held in Northern California in 1993, she jumped at the opportunity. And when she lamented that there was no local option in Portland, we said, “Start one” and she did just that. Jane served on the SHJ Board of Directors for many years, offering inspiration to all with whom she spoke. In honoring Jane, we noted that she “epitomizes the ideal volunteer, combining dedication, intelligence, talent, passion, and competency… Jane attracted a nucleus of loyal devoted individuals who now form one of our strongest and most creative communities.” 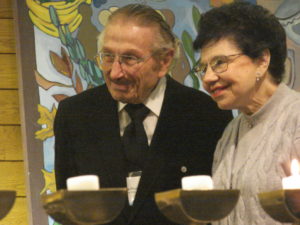 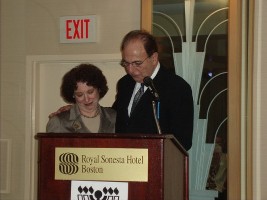 Bert Steinberg, the second recipient of the STW Lifetime Achievement Award, is the past president of the Society for Humanistic Judaism and of Kol Hadash, Northern California. He established the Pooled Income Fund as a vehicle for financial continuity and security for the SHJ. He is the past president of the International Federation of Secular Humanistic Jews and the Leadership Conference for Secular and Humanistic Jews. After a course of study, he became a madrikh, a ceremonial leader. In receiving the award, Bert was described as a person of action, a man of vision and a man of great generosity. 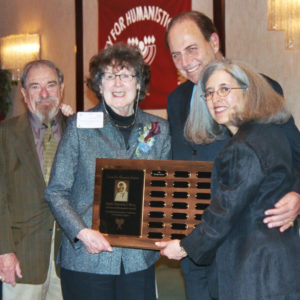