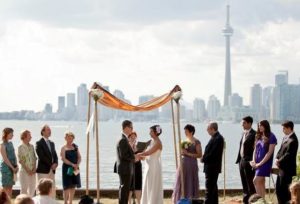 Humanistic Judaism has always wholeheartedly embraced, intercultural, interfaith, and same  gender marriage, even when other denominations of Judaism have not.

Humanistic Jewish ceremonies respect the differing backgrounds and culture of each partner. Meaningful and relevant rituals and/or symbols from both family backgrounds are often incorporated into the ceremony. While Humanistic clergy use only non-theistic language, co-officiants may use  theistic language common to both traditions.

Humanistic clergy believe that Secular Humanistic Jewish leaders have both a right and an obligation to celebrate, officiate, or co-officiate marriages for couples from mixed heritage traditions. The Association of Humanistic Rabbis has adopted official positions supporting both intermarriage and co-officiation.

Humanistic Judaism has always recognized the right of men and women to freely choose their marriage partners. Although marriage equality is now the law of the land, it is still not accepted in many quarters of the Jewish community. Humanistic Jewish clergy are thrilled to continue offering their services to all those who choose to marry. The Society for Humanistic Judaism maintains the position it took in support of marriage equality for same-gender couples in 2004.