An Evolving Skepticism Finds a Home

This is a guest post by Rick Pascal, a member of Kahal Chaverim in New Jersey, describing his and wife Maxine’s journey from Reform to Humanistic Judaism. 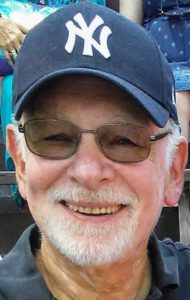 What does being Jewish mean to me? I was born into a Jewish family. My grandparents were Jewish and so were theirs. I am Jewish by default, labeled by society as a Jew. Do I practice Judaism the same way that my ancestors did? Like them, I’m certainly cognizant of our cultural roots, our history and, hopefully, the same ethical approach to society as one of its contributing members. But as far as devotion to prayer and worship, keeping kosher and other dogmatic aspects of religion are concerned, I’m fairly certain that I think and behave somewhat differently. Before presenting my philosophy about my Jewishness, let me first share with you some of my personal background in order to put it all into perspective.

At the age of eight, my parents enrolled me in Hebrew school at the Flatbush Jewish Center, a Conservative synagogue in Brooklyn, although we were not officially members. After my bar mitzvah, I attended the Tallis and Tfillin club on Sunday mornings where we davened (prayed), followed by a sumptuous breakfast of bagels and lox.  I was a junior cantor at Saturday morning services held for the children in the Hebrew school. I was a part of a group who welcomed me, and I enjoyed it. When I was 14, we moved to Queens and I said goodbye to my friends at the FJC. My parents did not join a synagogue in our new neighborhood. I felt no strong urge to find a new place to lay tfillin and worship, nor was I encouraged to do so.

Away from the influence of the rabbi at the Flatbush Jewish Center, and as a maturing teenager, I developed a more doubting (rebellious?) nature. Although my family did not attend synagogue, we still recognized Jewish holidays at home that held significance to us: Passover, Hanukkah, Rosh Hashanah and Yom Kippur. By this time, not attending services was okay with me. In high school I never denied my Judaism, but neither did I go around professing it publicly. And, especially with a name like Pascal very few people, other than my close friends, were even aware that I was Jewish.

As an engineering student at Pratt Institute, I was taught to be a skeptic. I learned to believe in and respect science as a basis for reality. Evidence was needed for results to be accepted as fact. When it came to the history of the Jews, I recall having discussions with my father about who wrote the Bible. So many stories were more like Aesop’s fables than history.

I rarely thought much about God. I behaved according to what my parents taught me about right and wrong. Being a good person was always what mattered. Whether or not God existed was of no consequence. I wasn’t taught that I would be punished or rewarded by God, either here on Earth or in an afterlife. I was taught to be a Humanist, only at that time we did not know the term as we do today.

My wife Maxine’s family practiced Conservative Judaism. Out of respect for their wishes, I agreed to participate in an aufruf on the Saturday morning preceding our wedding.  Aufruf, which in Yiddish means “calling up,” is the Jewish custom of a groom being called up in the synagogue for an Aliyah, the recitation of a blessing over the Torah. For several years after we were married, Maxine continued to participate in High Holiday Services at a synagogue not too far from our apartment in Kew Gardens, Queens. I chose not to, and remained at home.

We moved to Fair Lawn when our older son, Mitch, was three. Our younger son, Gary, was born here. When Mitch was eight years old, we decided to send him to Hebrew school. Friends of ours on Long Island told us how happy they were as members of a Reform Judaism congregation. They enjoyed its more liberal approach to Judaism and felt that we would feel the same way. Our next-door neighbor introduced us to Temple Avoda, a Reform congregation in Fair Lawn. Maxine and I agreed that we wanted our son to attend a Hebrew school that was more in line with the way we celebrated Judaism in our home. We met with Rabbi Selig Salkowitz at Temple Avoda and were immediately taken with his warmth, knowledge and understanding of how we, as a family, wanted to celebrate our Jewish heritage. Soon after becoming members Maxine and I were both elected to the Board of Trustees and for the next 27 years, attended most Shabbat and all holiday services regularly. Mitch and Gary both attended Avoda’s religious school through their bar mitzvah.

As I reflect on my involvement in Temple Avoda, I know that it was my personal association with Rabbi Selig Salkowitz that kept me involved in the temple even though I was never enthusiastic about praying. I was more involved in the business of running the temple as a Board member and Treasurer, enjoying the many social relationships and friendships we made. Selig and I (our relationship developed into a first name basis) often had lunch together during which we discussed a variety of Jewish topics and issues, including the existence of God. “Can you be a good Jew and not believe in God?” I asked. Rather than answer my question directly Selig, in his wisdom, suggested that I read two books about the thoughts of other rabbis and philosophers on this topic.  The first was God Was in This Place & I, I Did Not Know (Jewish Lights Publishing), by Rabbi Lawrence Kushner. It didn’t do too much for me, in all honesty. The second, Finding God, Ten Jewish Responses (UAHC), by Rifat Sonsino and Daniel B. Syme, afforded greater insight into the nature of God. A summary table in the Appendix differentiated the concepts of God: The Bible, Rabbinic literature, Spiritual Monotheism, Neo-Aristotelianism (Maimonides), Mysticism, Pantheism (Spinoza), Dialogue (Buber), Limited Theism, Naturalism (Kaplan), Humanism (Fromm). After reading these books, I felt my true feelings about God and the practice of Judaism resurfacing. My belief system was beginning to evolve.

Rabbi Salkowitz retired and was replaced by a rabbi who, although nice enough, was overly pedantic. His sermons were often esoteric, staged almost, as if he were reading aloud from a college textbook instead of trying to reach a general audience. Many of his sermons were focused on praising God. It was often not difficult to nod off during them.

In an attempt to learn more about the new rabbi I invited him to lunch one day and asked the same question I had asked of Rabbi Selig, “Can you be a good Jew and not believe in God?” His response was quite different from his predecessor. “Truly,” he said, “there has to be some power that knows all the answers; a power that knows absolute right and wrong.” Right then and there I know that he and I did not share the same belief system.

It didn’t take long for me to curtail my attendance at worship services. I was not comfortable reciting prayers in which I didn’t believe. Unlike the rest of the congregation during the recitation of the Alenu at the ending of the services, I did not bow my head nor bend my knee in praise of God. I was drifting away from it all and was no longer happy as a member of this congregation.

Thoughts about my approach to Judaism continued to evolve to the point where I was ready to profess that I was an Atheist. I drew my own conclusions about the existence/non-existence/relevance of God, the purpose and meaning of my life, what is right and what is wrong after a great deal of study and introspection. I was ready for Humanistic Judaism, only I wasn’t aware of the term.

I declined to accept re-election to the Board of Trustees. Maxine, however, continued as a member of the Board. I rarely attended worship services, even though Maxine did. On the few occasions that I accompanied Maxine to a service, I focused only on the meditations that held meaning for me. I could not recite the prayers extoling God.

During a Yom Kippur service, I felt the need to find another way to feel comfortable with being Jewish without yielding to self-flagellation. Until then I would be content to remain unaffiliated with a traditional congregation. We remained members of Temple Avoda for another year while Maxine was still on the Board of Trustees. She continued to participate in Services while I remained at home.

During that final year I learned about the North Jersey Humanists and attended several of their monthly meetings held in the Fair Lawn Library. Someone told me about a form of Judaism of which I had never heard: Humanistic Judaism and its umbrella organization, the Society for Humanistic Judaism. After conducting research, I realized that there was, indeed, an organized movement that shared my approach to Judaism in a non-theistic manner, and I decided to become a member of SHJ. Their literature yielded information about two Humanistic congregations in our area: The City Congregation in New York City and CHJ of Morris County, now Kahal Chaverim, NJ Congregation for Humanistic Judaism.

It was the summer of 2004 and the High Holidays were approaching. Maxine wanted to observe Rosh Hashana and Yom Kippur services as part of a Jewish community with formal services. We chose to attend CHJ’s services and felt a connection almost immediately – not only to the beautiful and meaningful content of the services, but with the founders, Rob Agree & Melissa Biren, and with just about everyone else in attendance. Having finally attended a Humanistic High Holiday Service, I was inspired by fact that I might now be able to celebrate my Judaism in a manner that was more suited to my personal philosophy.

Maxine was uncomfortable when we tendered our resignation from Temple Avoda, especially since she was still on the Board of Trustees. But she recognized that Humanistic Judaism, and specifically Kahal Chaverim, was what would enable me to participate in and celebrate my feeling of Jewishness. It did not take long for Maxine to totally embrace the concept as well. We’ve been members for 16 years and have enjoyed every minute of it.

Rick Pascal has just published his first book called “Detour,” a compilation of short stories filled with surprising twists, unexpected turns, and unpredicted outcomes. This book is available on Amazon in both paperback and e-book formats.