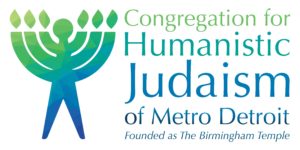 One of the core principles of Humanistic Judaism is that “we say what we mean and mean what we say.” That thinking is largely responsible for the treasury of creative celebrations and rituals that we’ve put together over the years. We want our Jewish practice to reflect our actual world view!

Like many congregations, over the past few years leaders of The Birmingham Temple have mounted a thoughtful membership outreach (recruitment) project. We replaced annual dues with an annual pledge. We eliminated tuition for our Spinoza Youth Education Program. These are great tools to attract folks to our congregation and movement.

Once these changes were accomplished, our conversation naturally turned to the best way to tell our story. Over the years we’ve discovered that even here in the birthplace of our movement, Humanistic Judaism is not well understood and our name was doing little to even prompt questions or curiosity about it! This was proof to some of us that holding onto it actually represented a bit of a breach of the principle of saying what we mean and meaning what we say. Not only did it fail to communicate anything about our unique movement, the name didn’t even pass the “say what we mean” test given that we had not been located in the Detroit suburb of Birmingham for close to fifty years!

With all of this in mind, momentum began to grow for us to select a name that could generate some interest about our congregational identity and allow us to better tell our story. Personally, I found that when I was out in the community introducing myself as the rabbi of The Birmingham Temple it often meant that I never even had the opportunity to state the most important thing about us, that we’re a community of Humanistic Jews. That alone might not immediately mean anything to people, but I’ve already noticed that when I say I’m from the Congregation for Humanistic Judaism I get more questions about what that means. It opens the doors to a meaningful conversation that some generic name of a random temple in Birmingham (that’s not even actually in Birmingham!) does not.

The did not come about immediately. It took well over a year of discussions at the committee, board, and congregation-wide level. The goal was to more deeply explore the premise that a new name might better communicate to the wider Jewish community – and especially to people searching for a congregation – just who we are and what we believe in.

After a great deal of study and discussion, our Outreach Committee determined that a name change could better serve us going forward as we seek to build and strengthen our community. The Board then endorsed expanding the project to the entire congregation, asking the committee to return with a recommendation for a possible name change.

What followed was a congregation-wide exercise to solicit and evaluate potential names. This took several weeks and produced 27 good suggestions – some English, some Hebrew, some a combination. We then sent an in-depth survey to all members.

Though there was little consensus around any single proposal, something important that emerged was a clear preference for all the names that included “Humanistic Judaism.” Clearly our members are extremely attached to our approach to Judaism and wanted our identification as Humanistic Jews to be emphasized in any name that we chose. This was even more interesting given our history. The original name was no more than a legacy of a short stay in Birmingham, some of which did not go all that well. For example, there was that time when the Birmingham Masonic Temple received so many complaints about our non-theistic celebrations that they actually evicted us! In any case, the original name did not emerge through any kind of conscious process. It was simply an inheritance.

Naming the movement, on the other hand, had been the result of deep consideration back in the 1960s. As Rabbi Wine recounted, he and the founders considered a variety of possibilities:

We searched for a word that would do justice to the way we felt about life and being Jewish. Rational seemed too cold and limiting. Naturalistic seemed too abstract and philosophic. Secular sounded too negative and anti-religious. Humanistic won the day because it was “warm” and spoke to our hearts.

The name Humanistic Judaism has met the test of time, communicating a positive and upbeat message. And given that the survey revealed such widespread attachment to keeping it front and center, it just seemed natural that it should take its rightful place as our new congregational name. To it we added our region of Metro Detroit, reminding people that we serve the entire region, not just one suburb. As for that suburb, we also learned from our survey that for some the original name still struck an emotional note. For that reason we included a tribute to it in our logo: “Founded as the Birmingham Temple.”

Our congregation’s members and leaders have always stood ready to share the story of Humanistic Judaism. With our new name, we no longer need to waste precious time explaining what Birmingham has to do with our anything. We can go straight to the story about our innovative approach to Jewish life.