We are so proud of all our B Mitzvah students. This article is a wonderful example of their inspiring work, from a member of Machar, our affiliated community in Washington DC. Thank you for representing Humanistic Judaism so well, Ari! Besides the great community service, he also offered a beautifully humanistic d’var torah at the end of the article:

His Mitzvah Project Helped the Children’s Hospital That Helped Him 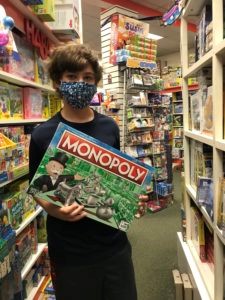 When it came time for Ari Priniotakis to brainstorm ideas for a bar mitzvah project, he didn’t have to think long or hard. He wanted to give back to an organization that supported him when he needed it most. So he raised money and donated $1,400 in toys and games to Children’s National Medical Center in Washington.

When Ari was 4, he underwent brain surgery for a Chiari malformation at CNMC. He remembers the hospital giving him toys to keep him busy while he was hospitalized.

“And one thing I can remember during my time was always having something to do or some sort of entertainment,” said Ari, a member of Machar: The Washington Congregation for Secular Humanistic Judaism. “So it was more of a good experience rather than something I look back on negatively. And I want other kids to experience that.”

Ari set out to raise money to donate toys to the hospital’s Dr. Bear’s Closet program, which accepts brand new books, toys and other gifts to give to patients and family members during their stay. The program’s goal is “to provide comfort, offer distractions and to normalize the hospital setting,” according to the hospital’s website.

So Ari started asking people for donations and did chores for family and friends. He pet sat, washed cars and helped renovate a basement. His goal was to raise $500, but he ended up raising $700.

Ari bought the toys at Child’s Play Toys & Books in the District. Not only did the store agree to open up early for Ari so he could shop with less worry about exposure to the coronavirus, but it also gave him additional toys to match his purchase. Store owner Steven Aarons said he wanted to contribute to the project in order to promote this kind of service toward others.

“It’s just the type of thing where if someone, especially a child, is doing this, you want to encourage it,” Aarons said. “So by doing some matching and making their money go further, it usually makes them feel a lot better. And hopefully it will build into something they do the rest of their life.”

The toys Ari bought include action figures, board games and arts and crafts materials. Ari said he also picked out some Star Wars and Thomas the Tank Engine toys in memory of his friend’s brother, who was a fan of both franchises and died of cancer at the hospital.

Ari planned to purchase and donate the toys before his bar mitzvah in June, but ended up delaying until September due to the pandemic. The ceremony, was originally to be held in front of friends at Sixth & I Historic Synagogue, but was livestreamed instead.

Ari said he preferred speaking to a small number of people from the comfort of his grandparents’ home in Massachusetts rather than to a large in-person congregation. He said his project was also inspired by his Torah portion, from Leviticus, which talked about the eternal light.  “Which I chose to interpret as how a person can keep the eternal flame inside them lit by doing clubs or things they enjoy, and then also volunteering or doing community service projects,” Ari said. “And I really thought this connected with me, so I thought it was the best way to keep my flame lit.”

Ari’s mother, Amy Rofman, hopes her son’s project shows that kids can make contributions to society, even during a pandemic.  “I’m really proud of Ari,” Rofman said. “And I think it’s remarkable that he took away from his experience in the hospital this positivity, and it was really fun, too, to see him work hard to really earn these donations. It was very rewarding for all of us.”

From the mitzvah project, Ari said he “learned what it feels like to actually really help support other people. And I think it just gives more meaning to your life to make an impact on someone else’s.”

Miriam Jerris is the rabbi of the Society for Humanistic Judaism.

Sukkot — Why We Celebrate
Coming In As A Humanistic Jew: A Christian Minister’s Son’s Story